The AGMs of the Angling Trust and Fish Legal were held in central Birmingham last Saturday, 21st of May.

Individual and club members attending heard presentations from the Chairmen of the Angling Trust and Fish Legal and a report on a string of successful campaigns and legal actions over the past year from the Chief Executive Mark Lloyd. The accounts were presented to the membership; both organisations reported a surplus in 2010 due to a reduction in overheads and administrative costs. Members heard about the plans for the Angling Trust and Angling Development Board to merge in the spring of 2012 to create a single body for all angling development and competitions in England; campaigning for the protection of angling rights and the water environment; and taking legal action against polluters and others who damage fisheries throughout the UK.

New volunteers were appointed to serve as Directors on the Board of the Angling Trust, following a unanimously-supported proposal from the floor for the nominations to be voted on as a group: 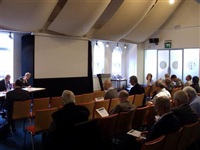 1,532 proxy votes were received from members unable to attend the meeting. Each Director received at least 6 votes for their appointment to every 1 against.

Roger Furniss retired as the Chairman of Fish Legal and as a Director of the Angling Trust. Roger will remain involved in the Angling Trust’s environmental campaigns, but he is keen to focus more on his role as Secretary of the South West Rivers Association.

A vote of thanks for all John and Roger’s work over many years was taken at the meeting, and particular thanks were given to Roger for his leadership of the merger process which formed the Angling Trust.

Dick Vincent, who was co-opted on to the Angling Trust Board in 2010, was unanimously appointed as Chairman of Fish Legal with immediate effect.

Chief Executive Mark Lloyd said: “We are very grateful to those members who attended the AGMs to show their support for the work of the Angling Trust and to contribute their ideas. It was great to be able to report on a very successful year in 2010, and on financial stability. I look forward to reporting an even longer list of achievements next year. The Angling Trust exists for the benefit of its members – their generous support and other contributions make all this work possible.”

Details of the new Directors and minutes of the meeting will be available on the Angling Trust web site shortly.