At first glance, the Team Avanti Seatbox looks like the Shakespeare seatbox that you will see in abundance any weekend on the beaches of the UK.

To be honest, I’d go so far as to say that it is an attempt at copying this icon of the sea fishing world.

With it’s padded strap and seat cushion, it’s not a bad job, either.

I don’t know if this Avanti product is as tough as the old Shakespeare one. It takes my weight, which is about 12-stone, but I think it may groan under the weight of some of my heavier buddies.

It could do with some instructions for sitting the strap. Luckily, I had my old Shakespeare one to hand and managed it; basically, you shove each end of the strap through a slit on either side of the box. Simple, when you know how. Not so simple, when you don’t! The bit that supports the wight when you are carrying it is plastic on this box, whereas my Shakespeare one has a metal part there.

There’s not a great deal you can write about such a box. It’s basic, plastic and serves two purposes; to carry your tackle and to serve as a seat.

However, if you’re not too heavy for it and are after a cheap tacklebox, this could well be it. At £20, it’s waterproof, lightweight, has a large capacity and should serve you well – I’d call that a bargain! 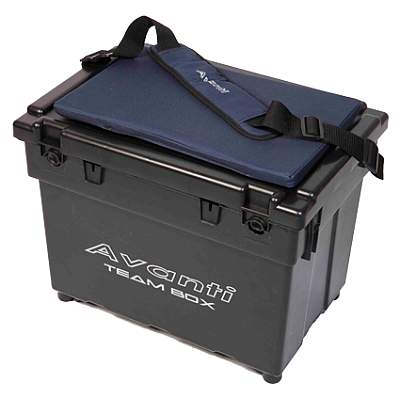 Although popular among sea anglers, there’s nothing to stop freshwater anglers using a box like this. Sea anglers use them because they do a job, withstand abuse from the elements and are easy to clean down. All of those attributes would also be useful to a freshwater angler!

If you are a large person, or put your seatbox through a fair bit of abuse, I’d say play it safe and plump for a box from Shakespeare or Daiwa. However, if you’re a bit more delicate with your gear, a youngster starting out or just on a tight budget, there’s no reason why this seatbox shouldn’t give you years of good use.