Bic Kayaks and Ultra Sport Europe are helping a group of ex-servicemen complete an extraordinary challenge as they plan to retrace the path of a WW2 mission to destroy German shipping in Bordeaux.

In December 1942, ten Royal Marines set out in five canoes to travel 70 miles up the Gironde River from out at sea, battling the weather, tides and shipping lines, as well as getting past enemy patrols. Only two of the men made it home – “Blondie” Hasler and Bill Sparks. The rest either drowned or were shot. 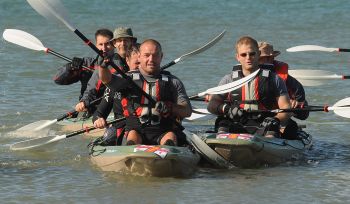 Now, a similar group of men will take on the challenge themselves, paddling the 70 mile stretch   up the river, followed by a further 20 miles to the extraction point, where they will swap kayaks for bikes and cycle the 100 mile ‘Franklin Trail’ that Hasler and Sparks took on their escape.

Ultra Sport and Bic Kayaks have come together with the team to support ‘Operation Cockle Shell Heroes’, by providing them with all of the kayaking equipment they need to complete the task.

The team said: “We have been given a massive boost with Ultra Sport Europe coming on board and giving us ALL the sea going kit we need. From kayaks, to wetsuits and hats, we can’t thank them enough.  We never dreamed a company would help as much as these guys have.”

All of the boats will be named after those used in the raid in 1942 – Catfish, Coalfish, Conger, Cuttlefish and Crayfish.

The team are aiming to raise £60,000 for the Help for Heroes charity and the RNLI, and will set off for France in June 2010. After the event the equipment will be auctioned off and the money will be split between the two charities.