If there’s one species to break the winter blues the plaice has to be it. Boat Fishing Monthly editor Dave Barham heads south to find the first plaice of the season.

Great Fun
I love any form of light tackle fishing, and do my best to go as light on the lead front as possible wherever and whenever I can. This trip was a bit of a mix and match really – I had originally travelled down to Hayling Island to meet up with my old pal Barry Meech, with a view to going out on his pal’s new boat.

As our phone calls progressed over the coming week we decided that it would be a bit of laugh to go out and have a crack at the plaice, because there had been plenty of reports of fish being caught. So, I left the boredom of my desk, jumped in my car and headed for the south coast. 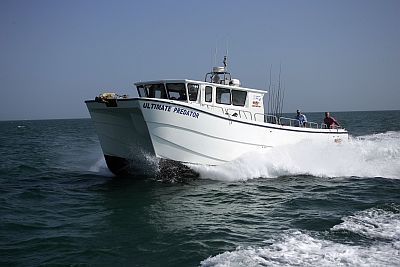 New Boat
The main purpose of the trip was to spend a few hours afloat on Barry’s mate Steve Guyan’s new creation – a revolutionary new 39ft 6in catamaran that he had allegedly designed on the back of a fag packet! Yes, I know it all sounds a little far-fetched, but upon meeting Steve I can honestly say that he was telling the truth. He came up with the idea for the ‘Catapult 396’ in the pub after a few lagers, and the only thing to hand was an empty pack of cigarettes. So that’s where the design started.

He spent the next two and a half years developing the moulds and then building the first vessel in his back garden – and what a beauty she is – the ‘Ultimate Predator’. The length of the craft is awesome, and with her walk-around wheelhouse you can easily fit 10 anglers along either side! As if that isn’t enough, the beam of 15ft 10in is incredible, and the entire boat is so stable you hardly know that you’re afloat. In fact, one of the comments on the day we went fishing put everything in perspective ‘It’s like fishing off a pier!’

Steve designed this boat specifically for stability, speed and fuel economy, and he has achieved all three with remarkable results.

Take a look at Steve’s website- www.catapultcatamarans.co.uk – and you’ll see loads more photographs and all the specs for the vessel – you can’t help but be impressed.

Light Tackle
After an hour or so of bombing about in the Catapult 396, I was more than impressed with her sea-keeping ability and performance. I was in awe of her, and I couldn’t help thinking that I’d love to own one of these wonderful machines myself one day!

But, it was time to switch my mind from daydreaming to fishing, as we had now reached our fishing destination.

Barry informed me that we could get away with using really light gear for the plaice, and promptly produced a light spinning rod with a 3oz lead on the business end – now that’s my type of fishing! Barry had loaded the fixed spool reel with 15lb braid, which gives the ultimate in sensitivity and bite detection. If a plaice even moves near your bait you’ll know about it! He had added about 12ft of 12lb fluorocarbon leader, just to give that little bit of shock absorption once a fish was hooked, and to reduce the chances of spooking the fish as we drifted over them.

Rigs
Joining us on board for the day was a select crew of both Steve and Barry’s friends. It soon became clear that they knew exactly what the score was, when they started to produce all manner of beaded rigs from their tackle bags. There didn’t seem to be any particular colour combination being preferred, but Barry assured me that a very short trace made up of black and green beads with a size 1/0 hook was the way to go. 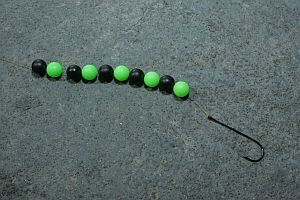 I was amazed to see that he had already rigged up and that his trace was just 6-inches long! This was clipped to another six inches of trace that was permanently fixed to his sliding lead set up – making for quick and easy bait changes, with another beaded trace being baited up in readiness to simply be clipped on to the main rig. I’d never used such a short trace behind a lead for any species, and was keen to discover if it would work. 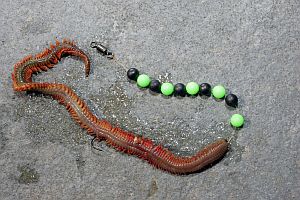 Baits
We had what seemed like half a ton of wriggly ragworm on board, with a few boxes of squid for tipping off, but the lads assured me that a single ragworm on its own was the way forward. In some areas you can have tremendous success with ragworm tipped off with a slither of squid, and in others a cocktail made from mussels, peeler crab and a whole host of other goodies does the trick, but fishing here seemed to be a simple affair. The idea is to thread the ragworm over up the hook and trace, leaving about an inch or two of the tail to wriggle enticingly.

The Heat Is On!
The day was really hotting up now, and as we started our first drift we remarked on how lucky we all were to be fishing on a ‘floating pier’ in such glorious sunshine.

Steve explained the method and that as soon as we felt a plaice nibbling at the ragworm we should free-spool line for the count of five. Then it’s simply a case of engaging the reel and winding down to the weight of the fish. This sounds easy enough, but it really does take a bit of getting used to. As a general rule, if you think you’re getting a nibble, free-spool it – it may be nothing, but there’s no harm in acting on every impulse.

Fish Galore
Sure enough, as we approached the drop off on the other side of the bank we were drifting over, Barry was straight into a fish. I didn’t need much more convincing that his short trace and black/green bead combination would work!

On the second drift there were three fish hooked, one of which weighed in just over the 4lb 8oz mark for skipper Steve – a right result!

The action carried on being fast and furious for a good couple of hours until the tide died away, and we ended up with a rather impressive tally of 36 plaice in just three and a half hours fishing – most of which were returned apart from half a dozen over 2lb.

I was more than impressed with the boat and the fishing. I can’t wait to get back down to Hayling for another crack at the plaice – and another day on board the ‘Ultimate Predator’. 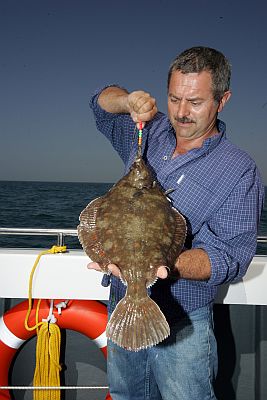