Now, he has been appointed consultant and Academy
Instructor with the Northumberland-based company and says he couldnâ€™t
be more delighted!

â€œI have worked for other
well-received companies but Hardy is something else,â€ said Charles. â€œAs
a child, I used to devour Hardy catalogues like other boys did comics.
Their tackle has always been part of my life and to work for them is a
dream come true â€“ the pinnacle of my career to date!â€

Hardy and Greys Managing Director, Richard Sanderson,
has brought Charles on board to give the company a greater presence at
events in the UK and to raise its international profile, particularly
in North America.

â€œWe couldnâ€™t think of anyone
better to represent our company in these markets and are thrilled that
he has agreed to help us â€“ especially with such enthusiasm,â€ explained
Richard.

The companyâ€™s newest recruit is in no
doubt about the enormity of his latest challenge but is confident he
can increase the Fly Fishermanâ€™s knowledge and appreciation of Hardy
and Greys.

Said Charles: â€œHardy & Greys
products almost sell themselves because they are truly exciting and
anglers all over the world who are aware of them are very enthusiastic.
But itâ€™s a huge global market and there are countries where the name
isnâ€™t as well known. I am determined to expand the anglers awareness of
their products and brands.â€

Charles now lives
in Shropshire but grew up in Kent where he began fly-fishing at the age
of three and caught his first trout when he was six. Following in the
footsteps of his father Alexander, he is as interested in river
management and the husbandry of fish and as he is in catching them. And
he has passed on his love of the sport to his own son Alex who, at 17,
is a member of the England youth team. 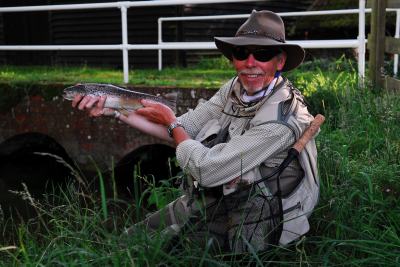