Once again, dedicated sea anglers will be taking the long trip up Scotland’s West coast to help gather data regarding one of the nation’s shark stocks on behalf of the Scottish Shark Tagging Programme  (SSTP – www.tagsharks.com).

The SSTP already runs two tagging Events focussing on other species in trouble, but this will be the inaugural running of an Event where the focus will be on Common Skate. Around 75 sea anglers using their own boats are expected to fish the Skate Tagathon Event in the waters around Ardfern, Argyll and Bute over the weekend 8th-10th April, 2011.

Common Skate are one of the largest species of fish in Scottish waters with some growing to well over 200lbs. It was once abundant in north-west Europe but there have been significant declines around the UK over the last century due to excessive commercial exploitation and bycatch. 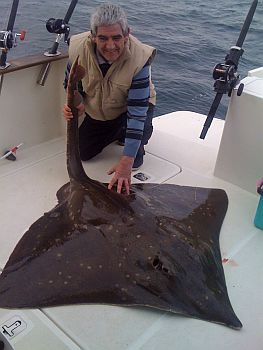 According to Willie Kennedy of the SSTP, “The data already gathered on common skate is beginning to give us some idea of their behaviour of these fish, but it is obvious it is not a simple black and white story – there appears to be a complicated pattern of residency and migration.

“As the recent Marine Atlas produced by the Scottish Government points out ‘As many elasmobranchs tend to school in sex and age related groups, trawls can often pick up large numbers of juvenile fish in a single haul before they have had a chance to reproduce. Therefore relatively few animals actually reach breeding age, and those that do only produce large enough numbers of young later in life to help rebuild a population.’

“Consequently if we can identify those areas where female skate congregate and reproduce then appropriate measures can be taken to regenerate stocks,” argues Kennedy.

Tagging is the only non-destructive assessment of sharks available to help provide data regarding species migration patterns, growth rates, population and stock make-up and stock fluctuations.

The main base for the Skate Tagathon Event will be the Galley Of Lorne hotel in Ardfern with the main launch site for small boats being Ardfern Marina.

Anyone wishing to find out more about the Skate Tagathon Event, or to register to take part in it, can do so at http://www.tagsharks.com/skate-tagathon-info