“‘Vampire’ is a metre longer than our previous
Ribcraft and if we had not been able to fit the new 300hp, we would
have either used a single Suzuki 250hp or twin 175hp engines. Twin
engines would have meant carrying more fuel and 55% more weight
onboard,” he says. “The 300hp is only 10kg heavier than the 250hp, it
has reduced drag, additional power and is fuel-efficient so it was the
obvious choice. It also has the benefits of reduced servicing costs
that come with a twin set-up.

“Suzuki’s new
precision control system is also impressive. The engine is responsive,
with no perceived lag, and gives the skipper a positive feeling of
control,” he adds.

‘Vampire’ also incorporates
Ullman Dynamic Seating and the latest integrated electronics from
Raymarine, including RADAR, AIS and the Wireless life tag system. It
also has the ability to show Suzuki engine management data on the C
& E series plotters.

The boat has
already supported the Round the Island race and will be the lead
support boat for the Bladerun Rally from 25-28 July, (www.Bladerun.com) when 30 teams of
celebrities, businessmen and adventurers cross the Channel from
Ramsgate to Amsterdam.

Support for the world
record attempt by the greatest number of windsurfers ever to cross the
Channel is penciled in for ‘Vampire’ later this year. It is also hoped
that the boat will take part in the Round Britain Race in 2008. 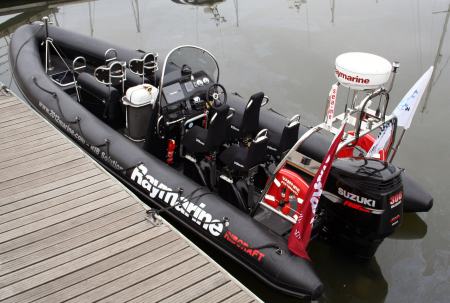