Look up and down any beach, especially in the colder months, and you’re bound to see a beach shelter or two about. I, like many anglers, have gone for a Ron Thompson Beach Shelter. A couple of friends have plumped for the Shakespeare Navigator and one friend uses a freshwater umbrella system. The one he uses is very good, but I’d be afraid to use one of my own brolly systems on a beach. The winds aren’t that forgiving and with the emphasis on most freshwater tackle being as light as possible, I’d be worried that it was going to crumple under the first real gust! 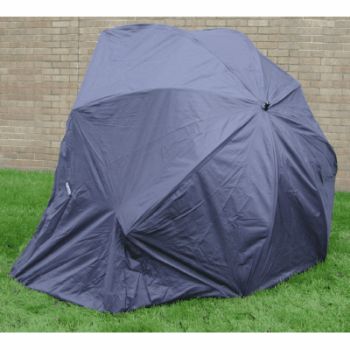 The Eclipse Beachmaster Beach Umbrella is built for beach fishing. It is made from heavy duty material and, although similar in appearance to its freswater counterparts, is made from a lot tougher materials! With a heavy duty sand skirt and wings, it’s built for the beach.

If you fancy a brolly style shelter, which would be especially suited to those who hike long distances or have trouble putting up other types of shelters, then this may well be worth a look.

At the time of writing, Lathams were selling them for just £44.99, which is a saving of £15 on the recommended retail price. CLICK HERE to check out the current deal.