The England Senior Shore Home International team have achieved an impressive victory winning the Gold Medal for the fifth consecutive year at Lough Foyle in Ireland from 30 June to 3 July, 2011.

The team consisted of; Malcolm Stote, George Smith, Garrie Forster, Gareth Griffiths and Nick Westgarth with Andy Dawkins stepping in as the Manager at the last minute.  Unfortunately, the selected manager Bob Gascoigne and original team member Ian Bellfield were unable to travel with the team at the last minute due to unforeseen family commitments. Despite not being present at the actual event, Bob had contributed significantly in the run up to the Championships. 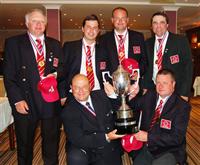 Despite catching plenty of fish during practice, calming seas and bright sunlight saw the numbers of fish drop dramatically on the match days.  This was to the detriment of both the Junior and Youth teams and due to the “scratchy” nature of the fishing did not get the opportunity to demonstrate their true potential, which was frustrating after all their hard work during the build up to the Championships.

The Angling Trust would like to offer their appreciation and thanks to the Irish Federation of Sea Anglers the hosts for this year’s SALC Home Nations Championships and to all those that supported the teams.  Special thanks go to Kamassan, Conoflex, George Cunningham of Tronix Pro and Anyfish Anywhere.  These companies provided valuable sponsorship to the teams.  We would also like to thank the parents who accompanied the teams for their efforts particularly David Graham and Ian Brooks.