Even getting to the Home International for the England team was hard going with the journey to the competition taking two days each way and even when at Stornoway, there was a 40 mile round trip each day to the fishing boats at Carloway on the west coast facing the Atlantic. The most travelled member of the squad completed 1800 miles by road plus four ferry crossings.

Three days of practice identified that, along with the rest of Britain, the summer season in Lewis was running late with the mackerel only just starting to arrive. Instead of the expected good sized cod, ling, pollack etc, the target species for the competitors were going to be the smaller dabs and gurnards, along with a smattering of haddock, whiting and other species. The bait supplied was frozen mackerel and squid but sufficient fresh mackerel were caught to provide the competitors with more than enough for their needs. 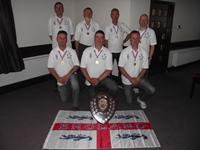 The wind was slightly stronger on the second day resulting in the boats drifting faster, and as a result the catches were slightly down, with the total fish point score being 1032 instead of the first day’s 1214. As each boat arrived back in port, the scores were calculated and the excitement rose despite the knowledge that a bad result by any angler would have a major effect on the team result. In the event England won the day with a fantastic score of 427.14% beating Scotland into second place on 417.21%. Ireland were third on 398.10% with Wales fourth again on 385.70%.

The Angling Trust and all the England team would like to offer their thanks and appreciation to the Scotland Federation for a superbly run, honest and fair competition.