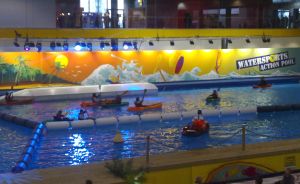 Another new feature of the Boat Show itself was also the colourful Watersports Action Pool. Here visitors were able to get on the water and try out kayaks from the Ocean Kayak range. Craft on the pool included the Frenzy, the world’s best selling single sit-on-top, the Malibu Two which is the world’s best selling tandem sit-on-top kayak and the Mysto, a great all-rounder offering versatility and performance. Standup paddleboarding was also featured on the pool and this year Johnson Outdoors UK was exhibiting the new Nalu 12.5 stand up paddleboard for the first time.

Kayak fishing specialist Andy Benham was at the Show giving top tips on kayak fishing in the Knowledge Box. Andy Benham’s talks called ‘Get started in kayak fishing’ were a big hit and well attended due to the ever growing popularity of kayak fishing as a sport. “People also came on to our stand to have a look at the fishing kayak range after hearing Andy speak and we were able to send people along to the talks who didn’t know about them,” added Andrew.  Again this new aspect to the Show promoted affordable and accessible boating allowing more and more people to get afloat. 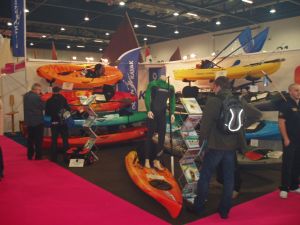