I seem to have an unhealthy obsession with lighting. In fact, as I sat and typed that last sentence, I spotted the scar on my left hand that came about when I was a kid, trying to fabricate a beach light from a bicycle lamp and a car battery. I slipped with a knife, causing a deep cut, and had to go to hospital.

Thank goodness for LED lamps. All manner of self-mutilation may have occurred if the God of bulbs hadn’t sent LED’s down to earth to save my poor soul. Well, my hands.

Nowadays, I have quite a selection of headlamps, torches and lanterns. Oh, and keyring torches, glow-sticks, etc. You get the idea! 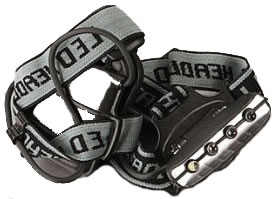 The Fladen 4-LED Headlamp is the smallest head torch I own. The battery pack holds 3x AAA batteries and the casing for them is not much larger than the batteries themselves. This sits at the back of your head, with a wire running to the lamp itself. Obviously, unless you have eyes in the side of your head (in which case, you’re my wife and why are you reading this?), the torch bit sits firmly at the front, with the button on the base. It has two on modes – one with two LED’s, one with 4 LED’s.

As the batteries are at the back, the LED section of the lamp is also extremely compact and lightweight. If you’re wearing a headlamp for a long time, this can make a lot of difference. I often use a traditional Petzl  headlamp for beach fishing, as I like the light it gives off. However, I tend not to wear it all night, as it is bulkier. Smaller headlamps can stay on all night, whatever type of fishing I’m doing. The strap goes around your head, with another strap across the top. I prefer this sort to the simple one-band affairs, as it stops it slipping.

LED’s tend to throw off a different light to old style headlamps. It often has a bluey tinge to it – that’s about as well as I can describe it. For some people, this light takes some getting used to. There are a few people who simply don’t like them. However, whether you like LED light or not, there’s no escaping the two main benefits, which are their tiny size and their ability to outlast traditional bulbs by a country mile. To give you an idea, I have one LED torch that stays permanently on in a kind of ‘standby’ mode. I suppose that it’s so that you can see its faint glow in the dark, making it easy to find and switch on. I last used that particular torch in May of last year. It’s January now and I guarantee that it will still be working! In the past, if a headlamp got switched on in your tackle bag, you were in serious trouble by the time you’d driven to the beach. Nowadays, you could drive to the moon and back and still tie on a hook in the middle of the night!

Having just 4-LEDS, there are brighter headlamps on the market than this Fladen one, but I don’t think it claims to be the sort that is used to spot UFO’s. It’s a lightweight, waterproof headlamp that will make close-quarter fishing activities simple to do in the dark. It won’t have you wishing you’d bought shares in Duracell and, as it’s under £15, it won’t break the bank. Basically, it’s everything you’d expect it to be.

This particular headlamp came from TackleBargains. Click here to see their entire range of lights and lamps.