The first thing that struck me about the Fladen Maxximus Nano Plus Boat Rod was the bag it came in! Normally, a rod bag is just a flimsy cotton thing. Nothing wrong with that; it’s just there to keep the rod parts together and offer a little protection.

This rod, however, has a padded bag that is so luxurious, I’d crawl in it and go to sleep if I could fit!If Fladen went to this length to keep it in tip-top condition, I was pretty sure that I was in for a treat as I slid the rod out.

The rod is a two-piece, with the butt section being just under a third of the rod length. 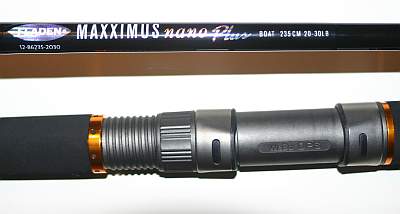 Appearance wise, this is a beauty. Gloss black, with a touch of silver on the ring whippings, of which there are nine. The butt section has foam grips and a touch of orangey/gold bling adds to the overall ‘prestige’ look of the rod.

It has to be said that, especially for such a powerful rod, the Maxximus Nano Plus is extremely light. It’s a rod that you could hold all day, if needed.

Nano technology can be deceptive; you are left with a rod that is lighter and thinner than its class rivals. However, the power is 100% there! It takes a fair weight to put a bend in this rod, despite it having a responsive tip. I remember using one of the first nano rods from Fladen a few years ago and the surprise on the faces of other anglers, who thought I’d come undergunned until they saw what the rod could do!

I’m an occasional boat angler, rather than a regular, and only have a few rods to pitch the Fladen Maxximus Nano Plus Boat Rod against. To me, it’s already my Number One rod now for times when I need something a bit bigger than my favourite 12-20lb rod. However, for a better opinion, I asked my good friend Dave Barham what he thought of it. As editor of Boat Fishing Monthly magazine, he’s used just about every rod on the market! Here’s what he said:

“Well, that’s a cracking rod mate, I’ve been using it for the past three trips I’ve been on and have caught congers to over 40lb on it.

It’s designed for braid and was designed by England Boat Team Manager Neil Bryant and team member Ray Barron (probably the most successful UK boat match angler of all time!).

The actual composition of the rod is claimed to give 30% more lifting power than conventional carbon rods, and I can well believe that having used it.

Nicely priced too, for a rod of this quality.”

Good looking rods that perform well above their price tag, these are available from all good Fladen stockists, Amazon and Tacklebargains. The Fladen Maxximus Nano Plus boat rods range from £89.99 to £99.99.