I’ve been through quite a few digital compact cameras over the years. Technology has moved on so  much, and prices dropped at a similar rate, that I’ve felt compelled to ‘upgrade’ from time to time. That may be about to stop now, however, as I think I’ve found a ‘camera for life’ in the shape of the Fujifilm Z33 WP!

To be honest, I wasn’t actually looking for a camera at the time, but one of the forum members on our sister-site mentioned this little gem (the original thread is here) and then I looked at the pictures my wife was taking with her new camera (a recent birthday from me) and realised that I just HAD to have a new one for myself.

After some negotiating with the sales person in Boots, I managed to get the last one from the display cabinet for just £55 (well, my sweet-talking wife did, if I’m honest!). Having owned it for a little while now, I can tell you that I’d have gladly paid three times that amount! 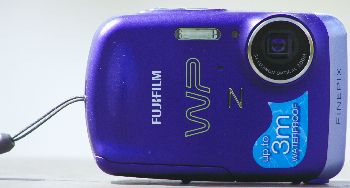 The camera itself is small and lightweight. It’s only just over 9cm long and weighs just 110 grammes, without the battery and memory card. I haven’t weighed it with them, but it’s probably only about 150 grammes. You can view the full specifications at http://www.fujifilm.co.uk/consumer/digital/digital-cameras/slim-compact/finepix-z33wp/Specs

One important thing to remember when buying this camera, as with most of them these days, is that you need to buy a memory card separately. I hadn’t, but a quick visit to eBay saw one delivered the next day, so I didn’t have to wait long to use the camera.

The main thing that appealed to me about this camera, initially, was that it is waterproof. Now, I don’t intend to use it very often underwater, but as any angler will know, our equipment often gets wet. Whether it’s a drop of rain, a misplaced landing net or even an impromptu wave-shower, we stand more chance of getting wet than most members of the public. I can speak from experience when I say that technology and water usually don’t mix! Having something that is waterproof means that you don’t have to worry about it.

The camera itself has amazed me. Firstly, I love its simplicity. Despite being packed with features, it’s 10 megapixel ability and Fuji technology means that it takes fantastic pictures, even in ‘idiot mode’. It ‘scene regonition’ software recognises what type of photo you’re taking and sorts itself out accordingly, leaving you to snap away. It even eliminates camera shake, something to bear in mind when you’re snapping your new personal best fish!

I took the Z33 WP on holiday with me and used it in bright sunshine, crowded rooms, dimly lit restaurants, in the sea and in the swimming pool. I was constantly amazed with the results, so much so that I got a load of photos printed via Photobox as soon as I got home, just to see if they were really that good. I’m pleased to say that they were!

The screen on this camera is relatively large, taking up most of the rear of the camera, so you get a good preview of any image you’ve taken with it. It has so many features that I’ll never make use of them all (You can read about some of them here – http://www.fujifilm.co.uk/consumer/digital/digital-cameras/slim-compact/finepix-z33wp/Features ), but suffice to say it has a timer and screw fitting for a tripod, making self-take photos relatively simple. It also has a good movie facility, which can be good fun if you want to share a moment with the world.

A camera, to me, was something I used to take fishing with me. However, I’m so impressed with the Fujifilm Z33 WP that I take it almost everywhere with me now. It’s so small that you hardly notice it, but the photographs it takes belie its compact size.

Prices for the Z33 WP seem to vary. In fact, it may be that it’s been replaced by a newer model, as some stores seem to struggle to get stock of it. The deal I had was exceptional, at £55. If you see it on offer at anywhere near that price, you’ll be doing well. As a camera for fishermen, I thoroughly recommend it.