DANIA BEACH, Fla., USA — A major milestone in the history of the International Game Fish Association has been reached as the mortgage for the worldwide headquarters of the 69-year old conservation and record-keeping body has been paid off.
"The remaining building debt of $5 million has been paid in full," said IGFA Development Director Eric Combast, who 18 months ago helped initiate the IGFA’s five-year Campaign for Game Fish Conservation.  "It now launches us into a transition phase of our multi-faceted campaign which enables hard work and focused planning to translate into solid global conservation outcomes for all recreational anglers."

The IGFA was founded in 1939. The actual 60,000 sq. foot building, which is now the permanent home of the International Fishing Hall of Fame, was completed in 1999. Besides a movie theatre and the extensive E.K. Harry Library, it holds the world’s largest collection of angling artifacts. It also features permanent and changing exhibits including historical memorabilia and interactive displays providing the hall’s visitors an excellent learning experience. The IGFA has its global headquarters in the three-story facility where it administers its world-wide programs.

"The IGFA would like to thank all of our trustees, close friends and corporate sponsors that contributed to the International Fishing Hall of Fame building fund, " said IGFA President Rob Kramer. "Their tremendous support has helped us reach this milestone in the Campaign."

A "burning of the mortgage" ceremony will be held October 24 during the Hall of Fame induction weekend.

Campaign Chairman Jeff Storm Harkavy said the completion of the loan was a major step in the $15 million campaign adding, "This positive momentum is allowing us continued progress in the four key areas of the campaign including education and outreach, conservation, the International Fishing Hall of Fame and a permanent endowment."

"We’re now able to focus resources and attention on youth education and game fish conservation," said Harkavy. "This includes a public awareness campaign to ban the importation of billfish into the United States and youth education programs that teach children ethical angling practices using fishing as a tool to get them excited about the environment."

"Of the remaining $10 million to be raised over the next three years $6 million will go to education and conservation and $4 million to endowment development," said Combast.

Kramer added, "We believe that the International Fishing Hall of Fame is an international treasure – one that embodies the grandeur of our great sport – one that houses the most complete history of angling – and one that belongs to all fishermen from all walks of life around the globe,"

The IGFA is a not-for-profit organization committed to the conservation of game fish and promotion of responsible, ethical angling practices through science, education, rule making and record keeping.  IGFA members are located in over 125 countries and territories. The IGFA welcomes visitors to its interactive International Fishing Hall of Fame in Dania Beach, Florida.     Its web site is www.igfa.org . 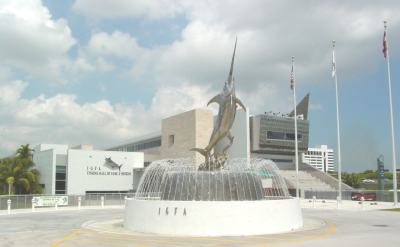