THIS IS HARDCORE FISHING â€“ GET HOOKED

Extreme action, excitement and incredible enthusiasm â€“ the
classic television series Hardcore Fisherman had it
all.

Now fans old and
new can watch all 13 episodes of this unmissable programme in a
must-have two-disc DVD set.

Angling expert Ricky
Gonzalez and his crew take to the crystal-clear waters off Mexico to
find the best fishing action around, and this is your invitation to
join them for extreme adventure.

Along the way
youâ€™ll encounter huge Dorado, massive Atlantic Sailfish, gigantic White
and Blue Marlin, a ferocious Shark and much, much more. 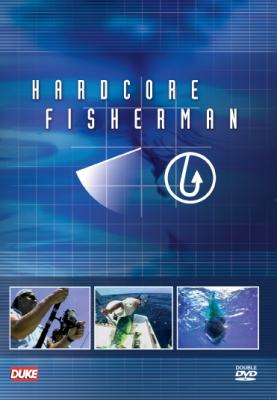 Amazing footage, including loads shot by
underwater cameraman Mike Day, lets you share the experience of game
fishing in a tropical paradise, from the thrill of landing a catch to
the heartbreak of the one that got away.

The
show also features some amazing fly fishing on the salt water flats,
including a bid to score the â€˜Grand Slamâ€™ of Bone Fish, Permit and
Tarpon, advice on getting the most from your experience and location
guides.

You wonâ€™t believe the teamâ€™s titanic
struggle with a 350lb Blue Marlin, or the twohour battle with a
Sailfish. This action just has to be seen as the fish just keep on
coming.

And, as the action hots up, so do the
tempers â€“ leading to some on-board bust-ups that are almost as dramatic
as the battles in the water! As the stars of the show say: â€˜Get
Hooked!â€™