Honda Marine has announced the addition of an all-new flagship model to its current line up of fuel efficient, high-performance outboard engines. The BF250 outboard, which debuted at Genoa Show in Italy on 1 October, will go on sale in the UK in early 2012.

The BF250 combines a new 3.6 litre V6, four-stroke engine delivering 250 horsepower with the world’s first direct air induction system for an outboard – providing the optimum balance of performance and fuel efficiency through Honda’s unique technologies such as BLAST™, VTEC® and ECOmo. The engine is certified NMEA 2000® compliant which provides the boat user with simplified connectivity to marine electronic equipment.

Through an all-new design, the BF250 incorporates a new streamlined, striking and sleek exterior look – the hood has a sharper, more angular profile over previous models and the overall design is more aero-dynamic with chrome lines conveying power and speed. 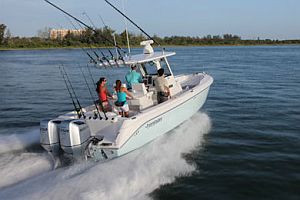 Phil Webb, Head of Power Equipment for Honda (UK) comments:
“The BF250 is the largest engine in Honda’s line up and reflects a global trend in customer demand for larger engines. We’re seeing customers with larger boats looking to make the change from inboard engines to outboards and needing more powerful outboards.  However, they are also conscious of the environmental impact of their choices, so maximising fuel efficiency is crucial – this is where Honda’s unique technologies such as BLAST™ and ECOmo are able to offer the ultimate combination of power and fuel efficiency”.

Honda is the world’s largest engine manufacturer and strives to be a company that society wants to exist in all its activities.  It was the pioneer of modern four-stroke engine technology for marine, based on the conviction of its founder, Soichiro Honda who said that ‘products that are used on the water should not pollute the water’.

Honda’s current class-leading range of engines from the BF2.3hp to BF225hp exceeds all European RCD regulations, which are among the most stringent in the world.  In addition, the recent integration of environmental technologies across its entire mid-range and larger engines further demonstrate Honda’s ongoing commitment to the environment.

Honda’s unique technologies and key features of the BF250 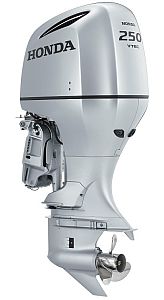 The BF250 features a host of Honda’s unique technologies and new features including: