If I asked a group of my male friends to describe Pamela Anderson to me, they’d probably all focus on a couple of, err, ‘physical attributes’ of hers. And the Humpalumpa would get much the same response!

Humpalumpa is a company that specialises in carts that are designed to take your luggage over terrains that many other carts won’t.   There are two carts in the Humpalumpa range for anglers; the Humpalumpa Big Fish and the Humpalumpa Small Fish. The one I’ve used is the larger version, which I suggest would be the better option for most beach anglers. 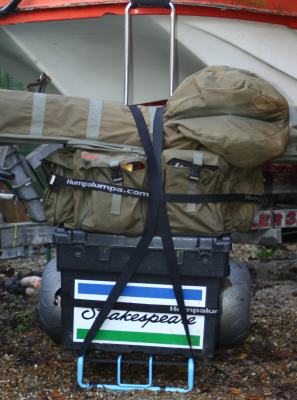 The Humpalumpa Big Fish is a pull along cart. Think ‘golf trolley’ style and you’ll be along the right tracks. It folds up remarkably flat, which means that it fits nicely into any car, yet is pretty spacious when set up i.e. when you’ve folded out the platform and extended the handle to the required height, which takes all of two seconds.

The platform itself is about 36cm square and will take most fishing seatboxes fairly comfortably, along with plenty of other tackle. In fact, any amount up to 75kg! There are a couple of straps provided, too, which I thought was a nice touch, as they are pretty essential for any cart.

The handle extends to almost 125cm and has a nice foam grip on it, which makes it not only more comfortable, but warmer than if it had been left as bare metal. My next project is to add a couple of clip on rod-rest to this, which shouldn’t be too difficult. This will mean that I can leave my tripod at home!

So, all the above sounds good. End of review, then?

Well, not quite. Now for the Pamela Anderson bit…….

The Humpalumpa Big Fish has ENORMOUS balloon wheels. Honestly, they stick out like Plug’s ears! (anyone under the age of 30 may want to Google Bash Street Kids!).

Instantly, as I took the Humpalumpa out of the box, I knew that these would help on some of the beaches around here, which can be quite a trek and real back-breakers at the end of a session. However, it wasn’t until I was about to attach a footpump to them, assuming that they’d been deflated to make them easy to pack, that I noticed a message telling me NOT to inflate them much. Time to read the instruction manual….

The Humpalumpa Big Fish wheels, referred to by the makers as ‘Wheeleez®’, run at a very low pressure. As I read about this, it all made sense – one of the ‘tricks’ that off-roaders often use when faced with tricky terrain is to deflate their tyres. This works in a similar way. The result is that they don’t dig in, as they flatten even more under load.

Apart from having a motorised trolley, or employing a ghillie to carry your tackle for you, I can’t think of a better device on the market for getting your gear across soft beaches. Okay, some may feel that it’s overkill if they’re lucky enough to fish marks 10 yards from their car, but those who want to take the hard work out of hauling their fishing tackle across large beaches in the cold would be well advised to take a look at the Humpalumpa range. With a bit of modification, such as clip-on rod rests and a tray, you’d quite easily have a pretty complete fishing station.

The Humpalumpa Big Fish is £99.99 and the Humpalumpa Small Fish is £59.99. You can find out more about them at http://www.humpalumpa.com/. There are also trolleys for the kayak anglers among you. 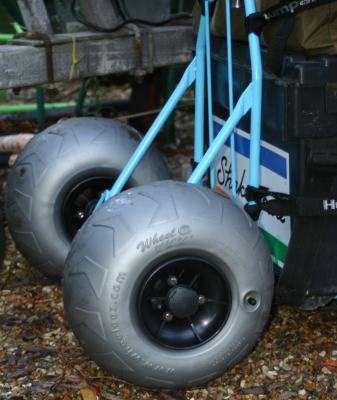