Johnson Outdoors UK is once again delighted to report that they have had an extremely successful Southampton Boat Show. Despite the economic climate outside the Show, the weather at this, the 40th Show, was generally the best we’ve had this summer and

the appeal of versatile affordable craft from Johnson Outdoors was as strong as ever.

“We had a brilliant Show and the Saturday of the last weekend was one of the busiest days I think we’ve ever had at any Show,” commented MD Andrew Dron. “Throughout the Show we also had a lot of our dealers placing new orders for craft and marine electronics which visitors had seen at the Show.” 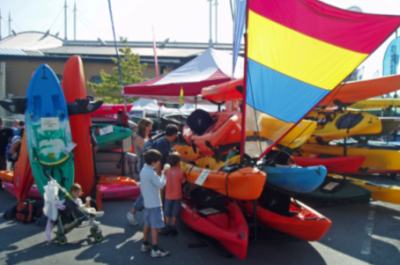 This year many new models of canoes and kayaks were on display and the popularity of kayak fishing in particular is increasing all the time. “We had a massive amount of interest in the new Ocean Kayak Prowler Trident 11 and 13, which are the smaller siblings to the Prowler Trident 15 fishing kayak,” added Andrew. “We’re also very grateful to all the members of the Anglers Afloat forums who came along to the stand and provided a great opportunity for kayak fishing enthusiasts to get expert advice.”

As ever there was also a fantastic choice for families who want to get afloat. The latest kayaks in the Vapor series from Old Town offered the perfect choice for anyone looking for user friendly recreational kayaking. And for those aspiring to the ultimate composite touring craft the new Chatham 16 Carbon Kayak from Necky proved irresistible. “This was probably the most touched boat at the Show,” said Andrew. For all types of canoeing and kayaking, the colourful new Pacific Action Kayak Sail Systems were also a real focal point. These lightweight sailing rigs are easy to handle and offer great versatility.

In the dedicated marine electronics trailer by Ocean Hall there was everything from portable fishfinders and entry level sonar to Humminbird’s award winning Side Imaging units. Retailers at the Show recorded strong sales of the 797c² (right) and the 787c² Side Imaging units. It was also announced at the Show that the new Humminbird big screen 1197 Side Imaging unit, which won the Innovation Award for Marine Electronics at Seawork, has also been short listed for the Fishing News Awards. The results are to be announced in October and the awards will be presented by Charles Kennedy MP. 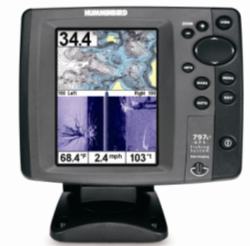