Investment in product development by the Johnson Outdoors Group led to Johnson Outdoors UK launching exciting new models in all its major brands at this year’s Southampton Boat Show. The result was even more choice for visitors looking for user friendly and affordable ways to get afloat.

“Although Show attendance was down we had a very pleasing level of sales and a lot of conversations with visitors on the stand; our dealers all around the country will benefit from the contacts we made,” commented Andrew Dron, MD of Johnson Outdoors UK. “We also had a lot of interest in all the new models which was encouraging because we believe the way forward is innovation and investing in product development. This underlines our confidence in the strength of our market,” he added. 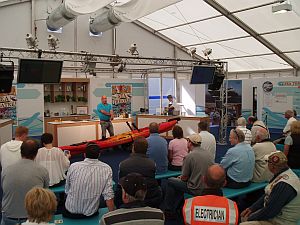 Among the many colourful craft on display were the latest Saranac family canoes with built in buoyancy. These offered outstanding value for money starting from £599. Ocean Kayak had new great all round sit-on-tops with the Tetra series and also unveiled the new Ultra 4.3 fishing kayak which was designed in conjunction with an America’s Cup engineer, Richard Karn. Necky introduced the new Rip 12 for beginner and intermediate paddlers and alongside its legendary touring kayaks there was also another new sit-on-top tourer, the Necky Vector 14. This has no enclosed cockpit but paddles with the ease of a sit-inside touring craft.

Kayak fishing enthusiasts also had a fantastic chance to pick up tips from an expert at the Show. A series of talks was given by kayak fishing specialist and author Andy Benham in the Boat Clinic. Andy used the Ocean Kayak Prowler Elite 4.5 in his master classes saying Ocean Kayak fishing kayaks were ideally designed for this sport which continues to surge in popularity. Further information on all the new products at the Show, including UK product launches, can be found at www.johnsonoutdoors.co.uk . 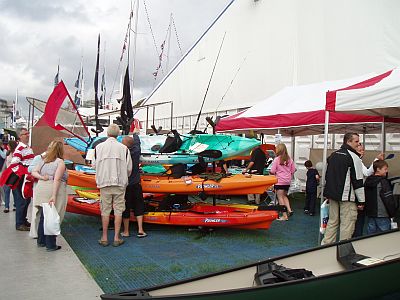