Help stop litter spoiling our beaches and coastline – that’s the message the Angling Trust is sending out to sea anglers with the national launch of its Just Take 5 campaign.

As well as ensuring they don’t leave any litter anglers are being encouraged either to spend just five minutes after fishing collecting any litter they come across or to pick up five pieces of litter.

Henry Gilbey, one of the Angling Trust’s ambassadors, said, “Anglers are the best people out there to help make our already fantastic coastline an even better place, and I wholeheartedly support the Angling Trust’s Just Take 5 campaign. Please, please look around you and spend a few extra minutes picking up litter, and of course it goes without saying that we as anglers must set the best example possible and never leave litter behind.“

David Mitchell , the Angling Trust’s Marine Environmental Campaigns Manager said, “Litter is an eyesore, it’s bad for the environment and it can be dangerous for both wildlife and people.

Most responsible sea anglers already take their own litter home, this is about going further and encouraging them, as custodians of our beaches and shorelines, to help remove non-angling related litter as well in order to help maintain the beauty and health of our coast.

The key to the Just Take 5 message is in its simplicity – anyone and everyone can do it each time they go fishing. If every sea angler in the country did this just think of how many millions of items of litter would be removed from our coastline every year.”

The idea was originally created in 2008 by anglers from the Angling Trust’s Wyvern Marine region. Phil Hyde, from the Trust’s Wyvern region, said, “The idea started after I was fishing at one of my favourite venues near Torquay in Devon. I was horrified by the amount of general litter that there was lying around. I knew sea angers could help improve the environment by each doing their little bit and the original Take Five initiative was born.”

The campaign is being supported by the Marine Conservation Society. The Angling Trust will be promoting Just Take 5 by providing angling clubs, tackle shops and other organisations with Just Take 5 posters over the coming months.

To join the Angling Trust and support the Just Take 5 initiative and other campaigns click HERE. 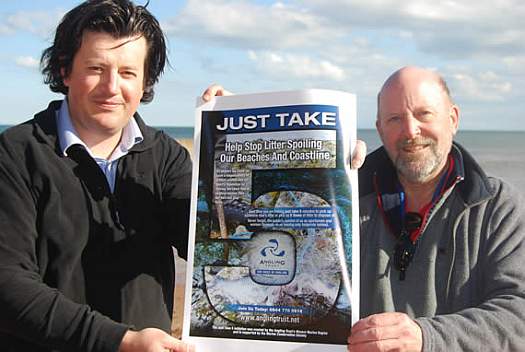