MCS repeats call for a ban on balloon releases

Gill Bell, of the Marine Conservation Society, says “Marine wildlife is suffering from a range of threats and most people do not give a thought to what happens to their balloons after they are released. MCS has evidence of the potentially lethal effects of balloons on animals, such as dolphins, turtles, whales and seabirds.  Marine animals suffer from a range of threats – please don’t let your balloon release be the cause of any more deaths.”

Mass balloon releases have been banned by authorities around the world, including some UK bodies, but the number of balloons found on UK beaches has more than tripled in the last twelve years, from 3.4 balloons per kilometre to 11.5 balloons per kilometre. The escalating numbers of balloons and balloon pieces increases the likelihood of animals encountering the balloons, which may result in death and suffering for many animals.

Dolphins, whales, seabirds and turtles have all died from balloons. Leatherback, loggerhead, Kemp’s ridley and green turtles have all been recorded in UK waters, and all are susceptible to marine litter ingestion. A juvenile green turtle washed up at Knott End-on-Sea beach near Blackpool in December 2001, starved to death after a balloon blocked its gut. In January 2004, a male leatherback stranded in North Carolina, USA – its gut had been completely blocked by plastic and an intact mylar balloon.

“Please remember – balloons can kill wildlife”, continues Gill Bell. “A balloon release is not a cause for celebration, but a possible death sentence for dolphins, turtles, whales, sharks, fish and seabirds.  While most balloons used in releases are made of latex rubber, which will eventually biodegrade, many animals may ingest (eat) the balloons, or become entangled in a balloon’s ribbon”. 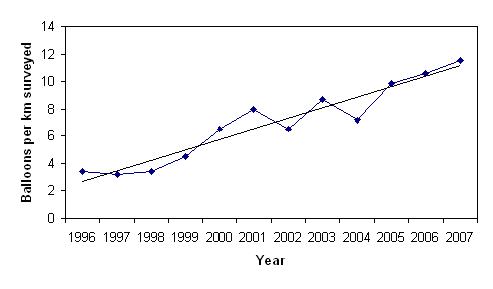 The ‘Don’t Let Go’ message is just one of the awareness raising campaigns MCS have to highlight the threats posed by human activities on marine wildlife.  The MCS Good Fish Guide promotes sustainable fishing, which could help reduce the amount of bycatch  (marine animals accidentally killed in active fishing gear), which is one of the main causes of death for stranded dolphins and harbour porpoises around UK coastlines. MCS ‘Beachwatch’ and ‘Adopt-a-Beach’ volunteers have collected over 373,000 items of litter off UK beaches – litter which could be a death trap for marine wildlife.  The MCS Marine Reserves Now campaign is trying to secure safe areas for wildlife to live in peace from human threats, such as fishing, dredging and pollution.   For further information please visit www.mcsuk.org