A screen shot of a mysterious underwater object has netted boat skipper Marcus Atkinson £1,000 after bookmaker William Hill awarded him its Best Nessie Sighting of the Year Award. 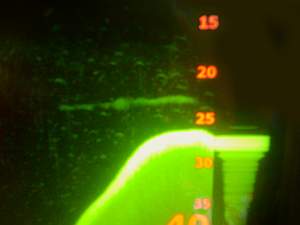 Marcus, skipper of the RIB Ness Express operated by Cruise Loch Ness, spotted the odd echo on his Lowrance HDS-10 multifunction display while out in Loch Ness’s Urquhart Bay.  Not having time to activate the HDS screen shot function he instead used his mobile phone to take the image shown on the right.

The award is run by the Official Loch Ness Monster Fan Club in conjunction with William Hill and although Marcus’s entry was not officially registered at the time a subsequent online poll conducted by the Inverness Courier combined with the views of an expert panel judged Marcus to be the winner.  The image shows something around 1.5m wide and 23m below the surface (indicated by the arrow above).  Its length is indeterminate.

Marcus has been working on the loch for 18 years and has never seen anything like this before.  “It is a bizarre shape to me,” he says.  “I have shown it to other experienced skippers and none of us know what it was.  When you look at the size of the contact, it rules out any fish or other creatures which would be in the loch. Because of the depth, it rules out seals, deer etc which leaves us with only one conclusion.”

The exact nature of the object in the water remains a mystery for now, but with Lowrance having recently launched the new StructureScan LSS-2 providing even higher definition, more range and more side-to-side coverage; it may not be a mystery for much longer.

For more information on the StructureScan LSS-2 and other products in the Lowrance range of marine electronics, visit www.lowrance.co.uk 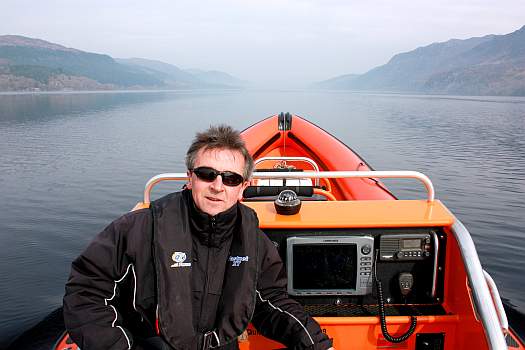