KAYAK FISHING AMONG THE ALLIGATORS

When members of the UK Ocean Kayak Fishing Team took part in one of the world’s biggest kayak fishing tournaments recently they had a few big surprises. They found themselves sharing the water with alligators which were considerably bigger than the Prowler Trident 11 kayaks they were fishing in. The team had entered the Jacksonville Kayak Fishing Classic in Florida, USA, which took place on May 8th and despite paddling among primeval predators they described the trip as a fantastic experience.

“It was a great tournament which was very well organised,” commented team member David Morris. “The Prowler Trident 11s were perfect for fishing the shallow inland waterways of the area.” Other Ocean Kayak team members were Paul Fennell and Martin Hurst and in total 430 entrants took part in the tournament. They were competing for over $70,000 worth of prizes and $42,000 was raised for local children’s charities. 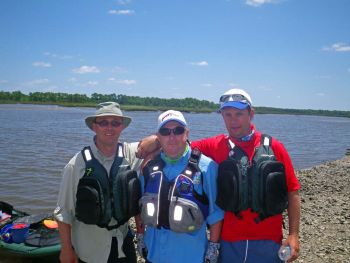 Competitors were fishing in four main categories for redfish, flounder, trout and in an ‘inshore slam’ to give an overall winner. The top prize of a fully rigged fishing kayak went to a Florida man, Ryan Conner who hooked a 30” redfish, a 17.1” trout and a 13” flounder giving him a total of over five feet of fish on the day. People came from all over the US to take part and the tournament included professional fisherman. Children also took part, in fact a nine year old girl even came third in the flounder division.

The UK Ocean Kayak team were disappointed not to win anything on the day of the tournament itself. The next day though Paul Fennel did manage to land a 34” redfish which was 2 ½” bigger than anything caught during the tournament itself. Unfortunately he also ended up in hospital after a catfish put a venomous spine through his finger. Other feisty species they encountered were stingrays “which were quite violent and would thrash their tails around trying to get you,” said David.

But it’s the encounter with the alligators which seem to be their most memorable experience. They also found out that the alligators paid special attention to dark green, the colour of their kayaks. “The first time we saw one it was about 25 feet away going across an oyster bed,” said David. “Then it made a charge for Martin’s kayak and he was pointing a little pair of scissors at it and screaming abuse while I was sitting about 10 feet away upstream laughing.” Fortunately the alligator dived away about five feet away from the kayak. David describes how, as well as seeing them in the water, they would hear huge hissing from behind them in the grass followed by a type of barking and ominous splashes … Not surprisingly, this made them decide it was time to move on.