Paul Churchley (48) is a man on a mission for the RNLI. He’s planning to circumnavigate Britain in a small motorboat, promoting sea and fishing safety while raising funds for the charity that saves lives at sea. He will also act as a voluntary ambassador for the RNLI’s new and unique MOB Guardian man overboard and vessel locater alert system.

Self-employed Paul, who lives in Saltash (Cornwall), will set off from Plymouth in May onboard his Suzuki powered 21ft Jeanneau Merry Fisher 625 Stargate. Ahead of him will be a 1700 mile journey, which will take him clockwise around Britain stopping at 20 ports along the way. He says it’ll be an adventure, but also a huge challenge:

‘I wanted a personal challenge and I’ve certainly got one! A small boat like mine is affected by weather and sea considerably more than larger vessels. Not only that, but I’m doing the entire trip on my own, promoting the RNLI in each port, planning the next leg at each stopover and making notes for a book I plan to write, which I hope will be the definitive guide to others planning a similar trip.’

Paul moved to Cornwall two years ago with a view to doing more sailing. He joined his local sailing club, developed a taste for motor boating and seized on the idea of going round Britain. His early planning led him to a meeting with the RNLI’s sea safety representative who took Paul through one of the charity’s SEA checks and cemented his determination to use the trip to raise funds:

‘I wanted to make the trip something more than a sea based challenge and felt it was an opportunity to support the work of the RNLI. So I’m hoping to raise as much money as possible for the charity’s Train one, save many campaign, which aims to secure funds for the training of the volunteer lifeboat crews. As a seafarer it is a huge comfort to know that the lifeboats are there if the worst should happen. This is my way of saying thank you.’ 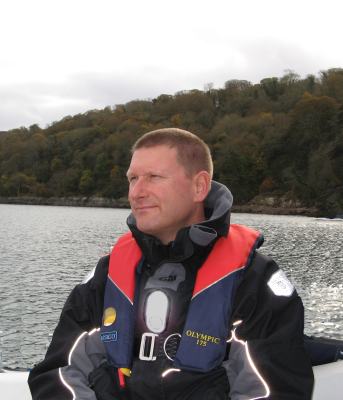 ‘Wherever he docks, Paul is welcoming fishermen onboard his vessel to look at a working MOB Guardian unit in situ. He’s offered to do this as he recognises the major contribution it offers to fishing safety.

‘We really appreciate Paul’s help as we’re trying to talk to as many fishermen as we can about the safety system, as quickly as possible, as grants available to help with unit costs, are running out soon. We’d like to wish Paul the best of luck with his trip and with spreading the fishing and sea safety messages.’

Paul is no stranger to adventure. A commercial flying pilot and instructor, he flew across America for six weeks, and he’s also ridden a scooter from London to John O’Groats and back. If the weather is kind, he hopes to complete his challenge in around 60 days and backing him up will be title sponsor, Suzuki and from home will be his wife, Sally Buswell.

You can find full details of this exciting trip and make donations on the web site at
www.roundbritain.org.uk