I remember the time I got my first “reel-seat-less” fishing rod quite well, the reason being that I’d ordered it mail order and then had to drive into town to buy some coasters for it. It was a bit odd, choosing where to put my reel, but it was quite a liberating experience once I’d got used to it. Being able to position a reel enables you to adapt everything to suit the equipment you’re using, along with your own casting style. I’m not a great caster, but can gain a few yards by getting things right. Not having a rigid reel seat also allows the rod to flex more freely, but I don’t know if my casting is really of a standard to appreciate such traits! 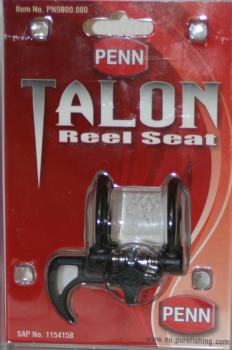 The coasters I bought were fine until the reel fell off. No big deal, I just fixed it back on again, but this happened more than once and the doubt in the back of my mind soon shaved off any extra yards that I’d gained. The thought of a reel flying off when five ounces of lead has just been launched at breakneck speed is not a very comforting one. Never mind the potential damage to my tackle – the potential damage to me was my biggest concern.

So, I tightened my coasters up very tightly each and every trip. Until one bust. Luckily, I had a spare, but that was enough for me. I had to sort this out.

I’d first heard about the Talon Reel Seats a few years ago on the AnglersNet forums. Back then, they weren’t made by Penn and seemed to be used by anglers “in the know”. I found out that Penn had taken over making them and promptly ordered one from Mike Thrussell’s World Sea Fishing website.

The Penn Talon Reel Seat fits butts between 21-28mm in diameter, which is most beachcasters, and simply slides onto the butt. The reel is placed under the two loops and a nut tightened by hand. This takes seconds and the resulting grip is incredibly secure. The talon at the back acts as an extra grip. I’m told that this bit is removable, but mine has been left as Penn intended it.

To say that the Penn Talon Reel Seat was like a breath of fresh air is probably an understatement. I now have 100% total confidence in the way my reel is secured and I don’t spend ages on the beach faffing around to make sure that this is the case.

Sometimes, it’s hard to justify spending £20 on an item that isn’t a rod or a reel. However, if you’ve already spent a reasonable amount of money on a decent rod and reel, then the Penn Talon should definitely help you to get the most out of them and you’ll regard it as £20 well spent.

The Penn Talon Reel Seat should be available in pretty much every tackle shop selling beach fishing tackle, as well as most online stores. As stated previously, mine came from the World Sea Fishing website, who offer a mail order service. 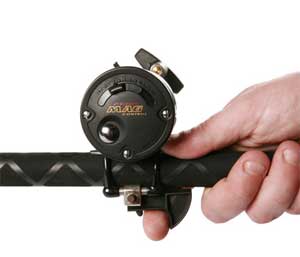