Used as safety boats to support work on the Forth Rail Bridge, the new fast craft Canada Online Pharmacy, buy meds cialis prescription online http://ramfarms.com/sites/blog/index.php?=cialis-tadalafil-20mg-sale Pharmacy For Sale Canada, where to buy 5mg cialis Best Canadian Pharmacies perform a vital service transferring crew and stores from ships on the Forth.

The decision to replace inboard diesel with outboard engines was due to a number of factors, according to Calypso’s joint owner, Stuart Taylor, who said:

"We had difficulty working with the existing diesel engine – we are commercial operators and can’t afford to have the boat out of service. With the new outboards we could change an engine in a few hours in the event of a major failure, compared to three or four days of downtime for the inboard engine."

He added, "The new Suzuki engines are much quieter and less smoky than the diesel inboard. A major advantage is the added working deck space inside the boat without the big inboard engine box."

Ribcraft Sales Manager, Jason Purvey, said: "Durability and reliability are the top priorities for this sector of the market and Suzuki are our first choice of outboard motor for our commercial customers. The competitive price, back-up from Suzuki and two-year commercial warranty form a package that really speaks for itself.

"We have fitted many of Suzuki’s engines in a whole range of commercial applications from 12-seater passenger-carrying boats used for eco-tourism, to harbour patrol boats and charter boats." 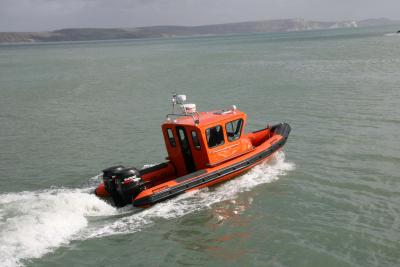