PiranhaMAX fishfinders from Humminbird offer performance, versatility and great value for money. These compact and highly popular entry level fishfinders are a favourite when it comes to simplicity – all the units are operated by just three buttons. However, behind that user friendly console is some highly sophisticated technology which Humminbird never stops improving. Thatâ€™s why theyâ€™ve just introduced the new PiranhaMAX range.

The PiranhaMAX 230PT has been upgraded to use dual beam sonar which incorporates a high definition centre beam and a wider scanning beam. This portable fishfinder can also be used with the SmartCast orange float. The float is a wireless transmitter which is cast on the fishing line and transmits information back to the display. It relays the temperature and depth of the water, shows the contours of the bottom â€“ and of course the fish.

All models in the PiranhaMAX range are available as fixed units or as portable fishfinders using a transducer with a suction cup. When portable they are powered by AA batteries and pack away into a rugged carrying case which includes integral cable storage.

Top of the range is the new PiranhaMAX 240 which uses Tri Beam Sonar giving an exceptionally wide field of view beneath and behind the boat. This sonar features a 20Â° downwards looking beam and two 35Â° side beams giving a total 90Â° scanning coverage. The PiranhaMAX 240 also incorporates an 8 level grayscale display.

Prices start at Â£89 for fishfinders in the PiranhaMAX range, including the transducer. 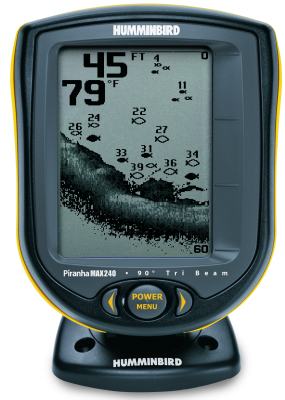 Top of the range – The PiranhaMAX 240