Powercats – the Cornwall-based powered catamaran manufacturer that started life on the Isles of Scilly 10 years ago – took a major role in the World Pilot Gig Championships on the Islands after being selected as the official safety boats for the international event.

Four Powercats made their way from their manufacturing base in Redruth to the Isles of Scilly, providing essential safety cover for all the competitors in the championships which were the biggest in its history with well over100 gig crews racing throughout the four day event.

According to Powercat Sales and Marketing Director Jay Pengelly, the company was delighted that Powercats were used as the official safety boats for the Gig World Championships and was delighted to see them out on the water providing such an important role.

“We were delighted that Powercats were used as the safety boats at this year’s Gig Championships – and from a safety perspective were equally pleased that they were not called upon to help any competitors. The boats were designed specifically to deal with the waters that surround the Isles of Scilly and are perfect for a safety boat role, so when we were approached by the Championship organizers we were delighted to provide our boats to them in an official capacity. 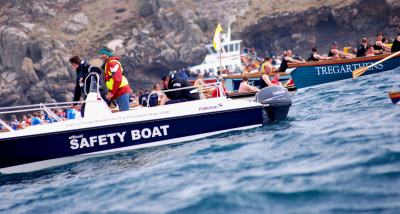 “As always, the Gig Championships was an amazing spectacle and it was fantastic to see our boats providing safety cover to every race,” added Jay.

“With hundreds of competitors out on the water, often racing at fairly close proximity in a range of sea conditions, safety is of paramount importance and we were delighted to be able to have the Powercats available as safety boats, which meant we could get close to the gigs without impacting upon the rowers or the water they were racing in.

“We were also delighted that they were not called into action but they performed superbly and we hope to be able to use them again next year,” said Mr Covell.

Launched by Barry Philpott on Bryher 10 years ago, Powercats has developed from exclusively supplying boat owners on the Isles of Scilly, to become the UK’s leading powered catamaran manufacturer with customers around the UK and Europe.

Named Innovative Boat of the Year in 2006 at the British Marine Awards, the company moved its manufacturing base to Redruth in the same year, which it has recently expanded further, to keep up with demand for its 525 range of boats.

The company will also be launching a completely new model – the Powercat 695 – in June this year having had its most successful year ever in 2007.

For more information on the range of Powercats call 0845 2493525 or visit www.powercats.co.uk