NEW FEATURES FOR THE PROWLER 13

Ocean Kayak is the World’s Number 1 for Sit-On-Tops and the Prowler 13 is one of the most popular angling kayaks in the UK. It now incorporates extra features to make it even simpler to fit a fishfinder. Fishfinders have revolutionised kayak fishing and the Prowler 13 has been tailor made to make installation of a Humminbird fishfinder kit quick and easy.

A scupper hole inside a cup holder and a special recess in the hull are used for fitting the transducer. The fishfinder kit comes with a specially designed transducer boot for installing the transducer into the hull. It also includes a mounting plate for the display and a cable gland for the power cable. All Humminbird fishfinders are waterproof and are available with a quick disconnect system.

As well as being fishfinder ready, every aspect of the design of the Prowler 13 is considered down to the last detail. This is a stable, tough fishing kayak which is light to transport off the water and highly manoeuvrable when youâ€™re on it. It feels safe to paddle in all conditions, is fast and has exceptional tracking and performance with almost no water slap. This is a great all round kayak, equally at home paddling through surf or nimbly picking your way amongst the rocks. Being manufactured from rotomoulded monolink polyethylene it is also incredibly durable.

The Prowler 13 is 13â€™4â€ (4.1m) long, weighs 54lbs (24.5kg.) with a carrying capacity of between 400-450lbs ((181 -204kg). It comes with a comfortable seat back as standard and a highly practical deck layout which keeps everything easy to manage. Features include a large moulded in tank well capable of taking a large fishing crate; a bungee is included to keep equipment well secured. For dry stowage thereâ€™s a large bow hatch and a 6â€ center hatch with a storage bucket.

Other features include two flush mounted rod holders, a Plano bait box, moulded in footwells and paddle keepers. The deck layout is also ideal for adding any extras. There are moulded inserts for anchor trolley fittings; this allows you to rig a simple traveller to set the anchor at either end of the boat. An optional rudder can also be fitted. Even with the extra features the price remains the same for the Prowler 13 at £559 or £529 for a non-angling version. Materials used by Ocean Kayak are repairable and recyclable. 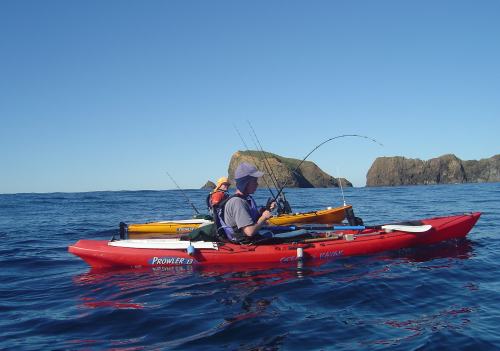