April 2007 ~ The new Raymarine A60 dual function chartplotter and fishfinder is the latest addition to Raymarine’s A Series range of marine electronics.  This affordable, compact and fully waterproof unit offers all the benefits of Raymarine’s sophisticated technology in one product.  Highly accurate GPS position and detailed chartplotting capabilities can be combined with Raymarine’s patented HD (High Definition) Digital fishfinder technology, with fully automatic operation which provides exceptional clarity of fish and seabed.

With a range of Digital Sounder Modules (DSM), Raymarine now offers new technology sonar processing with such clarity of vision that fishermen can stop searching for fish, and actively target the ones they want to catch.  Bait fish can be distinguished from larger species, and for wreck and diving work, the digital sonar technology differentiates what would previously have been the mass echo of a wreck into sharp images showing structure and contours.

Digital Sounder Modules are available in three options – the DSM25, DSM30 and DSM300. The new A60 and the larger screen A65 dual function chartplotter and fishfinder both use the DSM25, which automatically adjusts more than 220 sonar parameters per second, and has 500 watt output power operating on a dual frequency of 200/50 kHz.  For integration with C Series or E Series multifunction displays, Raymarine offers the powerful DSM300, which provides a power output of 1000 watts and uses 24 volts, and the new DSM30, which has a power output of 600 watts, and operates on 12 volts.

Easy to operate, these compact, stand alone and affordable A60 and A65 multifunction units will enhance the safety, success and enjoyment of many sport and leisure fishermen and boaters. Raymarine’s range of dual and multifunction chartplotters and fishfinders are available worldwide through Raymarine’s international network of distributors. 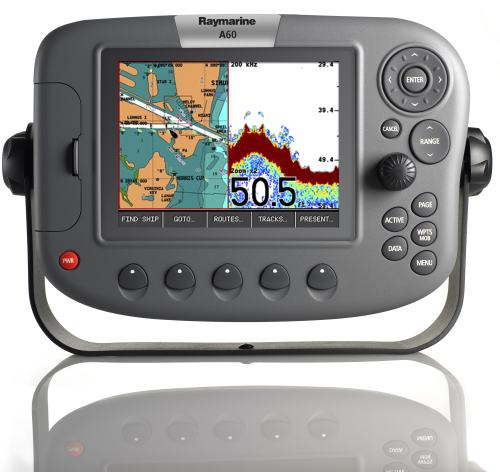