A very rare sea fish has been found dead on the Northumberland coast and experts believe it to be the deep water Ribbonfish.

The Ribbonfish was discovered by three local men on the beach at Hauxley near Amble on Sunday 31st January, 2009. As the men had no idea what species it was, they sent a picture to Sam Harris, a sea fishing programme presenter for BBC Radio Newcastle. 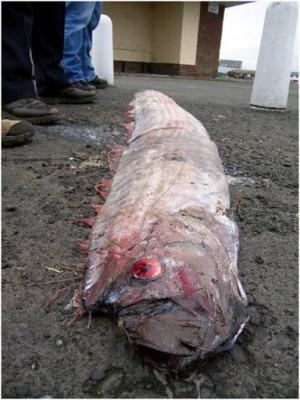 Sam took some time to research the find and explains;-
"I remembered a story of a woman catching a huge Ribbonfish off of the Cleveland coast in 2003 and this looked like the same creature. It is a very rare fish in UK waters – only three or four have been reported caught or washed up in the last fifty years – so I passed the image on to the team at OnlineFishing.tv to see if they could identify it for sure."

www.onlinefishing.tv is a dedicated online television channel that films new fishing programmes for anglers and the production team includes a number of experienced sea anglers and angling magazine writers.

"It does look like a Ribbonfish, also known as an Oarfish – Regalecus glesne – and is rarely seen around British coast lines. They can grow up to 10 or 11 metres long and weigh more than a quarter of a tonne, but are usually more at home in deep, sub tropical oceans. Maybe warmer sea temperatures have pushed them into areas such as the North Sea?"

The Ribbonfish propels itself with a long undulating dorsal fin and is the longest bony fish in the sea. It is believed that this was feared by mariners for many centuries as a mythical sea serpent or monster.

Gareth continues;-
"We are filming a new programme soon about recreational cod fishing off the North East coast. It may have no teeth, but I hope we don’t hook into one of these ugly brutes!"

More information can be viewed at www.onlinefishing.tv