Sea fishing is often seen as a pursuit of hard, or mad, men! Standing on a freezing cold beach in the rain isn’t everyone’s idea of fun and, however much you enjoy it yourself, it’s hard to argue with someone who tells you you’re crazy for doing it!

I’ve owned my Ron Thompson Beach Shelter for well over a year now and, honestly, only used it for the first time recently. Why? Because I’m one of these pig-headed types of blokes who often sees using items that make my angling a bit more comfortable as ‘being a wimp’, despite telling others that they should use them and also despite using other items, such as handwarmers and a luxury sleeping bag (when carp fishing) and wondering how I ever did without them! 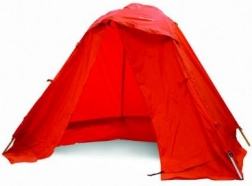 So, on a recent beach trip, I took my ‘only-ever-set-up-in-the-back-garden’ Ron Thompson shelter with me. To be honest, I still had no intention of using it! It was my angling partner for the day, Steve, who badgered me into it and, lo and behold, I’m now a convert! After setting up his own Shakespeare Navigator shelter, Steve said we should have a go at mine. It’s a slightly different set-up to his, but still only took a couple of minutes to erect and secure with sand. Since that day, a few people have mentioned a video on YouTube to me, so I’ve taken a look and it is, indeed, very useful.

The shelter itself is very spacious. I don’t use a seatbox (nothing against them – I just don’t own one!), so had a fold-up garden chair, a rucksack, rod bag and various other bits and pieces scattered inside the shelter. There was plenty of room. In fact, I reckon two anglers could get under there at a push. It would be cosy, but better than standing outside in a gale!

Once inside, it’s like you’ve entered a different world. I’m so used to standing on beaches and piers with no shelter that it was all very alien to me at first. All of a sudden, that blustery, harsh beach that I’d become so accustomed to seemed a million miles away. Once you’re inside, the tough material keeps the wind at bay, packs of hooks don’t fly off at sixty miles an hour and you could even listen to the radio, if that floats your boat! Why, oh why, hadn’t I done this before?

The Ron Thompson Beach Shelter is made of tough material, which is what you want on a beach. It’s not exactly heavy to carry, but there are lighter shelters about, I’m sure. I actually did try a different one once and failed spectacularly to unfold it in a high wind. Oh, how the onlookers laughed! To be honest, I like the fact that the canvas (or whatever material it is these days!) feels thick and strong. It gives the impression that it will take just about anything thrown at it. The last thing you want to be worrying about in harsh weather conditions is whether or not your shelter is going to spontaneously disintegrate. Anyone remember what it was like in the old days of brollies?

The Ron Thompson Beach Shelter is quite long when packed away, as it just folds down flat, but fits easily into most rodbags. Actually, packing it away is another one of the plus-points for this shelter, as it takes seconds. I hate packing up – to me, it’s the worst part of any fishing trip. On a beach, it’s often made worse by the cold and the wind. And the fact that I’ve blanked again. Now, I pack up in relative comfort inside the shelter, and then fold the shelter away in seconds. Bliss.

I’ve seen this shelter offered in Red, Green, Black and Blue. I can see no reason why any sea angler would want any other colour than red, to be honest. Dark colours on a dark beach just spell disaster, in my mind. Be seen and the chances are that your mate fishing next to you won’t crash into your shelter!

Looking around the internet, most places seem to sell the Ron Thompson Beach Shelter for around £50. In my eyes, that’s £50 well spent. The fact that there are so many in use bears testament to the fact that others feel the same. Break that down into ‘pence per session’, and you can see that it offers real value for money, as it should last a long time.

One place currently selling them is Fishtec – CLICK HERE to see their current deals. You can also find secondhand and discounted ones from time to time on Ebay. Click here to see the current offers.

Finally, I mentioned a video that I’d been told about. I’ve included it here, but take no credit for it! It’s on YouTube and I’d like to thank the angler who made it for putting it there, as his method looks extremely fast and one that would work in even the windiest of conditions. Cheers, mate!