“Cor, you’re knife’s a bit blunt, Elton. I’ve got something at home that’ll sort that.”

When you’re sitting on a small boat, a few miles out to sea in the freezing cold, a sharp filleting knife can make life a lot easier when gutting cod. My knife certainly couldn’t be classed as sharp right then and it was my fishing partner for the day who later introduced me to the Samurai Shark Knife Sharpener.

At this time of year, it gets dark quickly and it was pitch black when we got the boat back home. I didn’t want to be a pain, so said that we’d sort the knife next time. “No, it’s no hassle. It’ll only take me a minute,” came the reply. 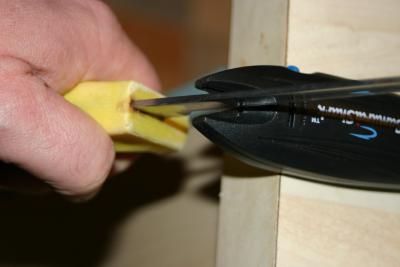 I then saw my first demonstration of the Samurai Shark Knife Sharpener.

To be honest, it’s a simple little device, so this won’t be a lengthy review. Basically, it’s an adjustable ‘V’-shaped sharpener, housed within a 16cm plastic body, designed to give a new ‘edge’ to a knife. Operation is simple; you sit it on a worktop, where a lip holds holds it in place, and run your knife down the groove in it. This peels a very slim piece of metal off each side of the blade, giving your knife a new lease of life. I’ve performed the old “Is it sharp enough to slice a piece of paper?” test and it has passed every time. This would be more than adequate for most angling uses, although some members on the Anglers’ Net forums mentioned that a sharpening steel would then finish the job nicely.

I was so impressed that as soon as I got home, I bought one from an Ebay seller! Since then, it’s been put to work on all the household knives, not just my fishing ones. It’s not often our non-angling partners approve of our purchases, but my wife didn’t have a bad word to say about this one!

At the other end of the sharpener, there is a retractable device for sharpening serrated knives and a multitude of other types of blades. I haven’t used this yet, so can’t really comment on it. Come the spring, I may well try it on some of the garden tools. It looks a bit more ‘hard work’ than the end with the V-sharpener in, though, so I may well have forgotten that last sentence by then!

For a cheap little accessory, the Samurai Shark Knife Sharpener is great value for money. It’s already made life a lot easier for me. It’s relatively small size and light weight mean that it can stay in my tackle box….as long as the wife now lets me take it out of the kitchen!