It is the oldest fishing competition in the country and this year the 99th Annual Scarborough Angling Festival took place offering nine days of fishing from the shore, boats and kayaks. The kayak fishing competition took place on Saturday 26th September and was supported by Johnson Outdoors UK and Robin Hood Watersports of Heckmondwicke, West Yorkshire.

A prize of a Humminbird 383 colour GPS fishfinder went to the winner of the kayak fishing competition, Steve Sowersby of Bridlington. He caught the heaviest fish, a cod weighing 7lb 12oz and the prize was presented at the Scarborough Anglers’ Club on Saturday night. During the day while the competitors were after the biggest catch, other anglers and members of the public were also able to try out a range of Ocean Kayak fishing kayaks from Johnson Outdoors UK. 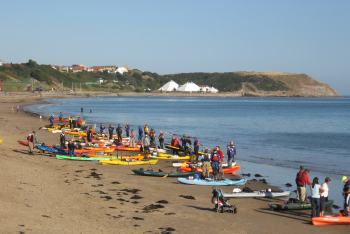 This is the second year that kayak fishing has featured in the Scarborough Angling Festival and forty three kayak Online Pharmacies, The Generic Pharmacy Philippines where in england there bayer levitra http://makeandfable.com/wp-content.php?=online-levitra-paypal Online Canadian Pharmacy, levitra discount coupons Medicare Pharmacy anglers from across the UK came to take part. “It went really well and we had people coming from Hampshire, Scotland and North Wales,” said Dave Adamson who organised the kayak fishing competition in conjunction with the Festival committee. Many camped nearby at Filey on the Saturday night and on the Sunday they were able to enjoy some social fishing in Filey Bay where there was also a demonstration of kayak safety techniques. “Once again the feedback from all those who took part in the weekend was very positive and there has been a lot of discussion about the competition on fishing forums such as whitbyseaanglers.co.uk,” added Dave. “I feel this is going to become a regular event which can only get better and better.”

As well as lots of interest in the fish, Aaron Emms of Robin Hood Watersports said much attention was paid to the Ocean Kayak models on display which included the Prowler Trident 13, the Prowler Trident 15, the Prowler Big Game Angler and the Scupper Pro TW. “Our staff didn’t stop talking to people all day and it was a great opportunity for general members of the public to get afloat and try the kayaks out,” he commented. He added that the interest in the craft on display at the Festival reflects the soaring popularity of kayak fishing generally. “It really is our fastest growing area and in the three years since we’ve been selling fishing kayaks we’ve seen business increase ten fold.”