There are still a few days left to grab your copy of the 450th issue of Sea Angler, which is on sale between February 18th and march 17th, 2010.

The front cover promises to help anglers to keep catching flounders, which will often feed in spring when other fish refuse to play the game. There’s also mention of a guide to fishing inner estuaries and another guide for finding those North East sea angling hotspots!

Let’s take a look inside: 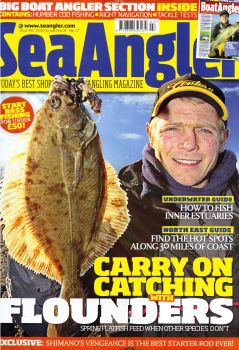 FEATURES
Carry On Catching
When winter sport wanes, it doesn’t have to stop you fishing, says Sea Angler’s Paul Fenech.

New Welsh Wizard
Zac Harrow-Deitz is a young shore angler making his mark in the sport. South Wales consultant editor Dave Lewis meets up with him on Mumbles pier.

Spring Fever!
Glasgow Angling Centre is the place to be from March 5-7 to see probably the best range of gear in Europe.

The Full Irish
Alan Yates joins Fountain SAC as they head for the Beara Peninsula in County Cork.

Use Your Freezer!
Do you realise that when the weather is hard, bait supplies dry up? Gravesend angler Shane Pullen has the answer.

After The Storm
Get out on the beach or pier during the more unsociable times and conditions and you are sure to hit the jackpot.

Flounders Fill In
Sea Angler’s subsurface series goes below the murk of muddy estuaries to see what species can be caught.

Hot Shot Alley
Paul Fenech puts you on some top cod mark in the North East.


GEAR SECTION
Tackle Shop
A look at a batch of new products.

Beginner’s Rod
Alan Yates isn’t generally a fan of cheap beach rods, but will the Shimano Vengeance change his mind?

COMPETITIONS
Penn Sea League
Find out who is top of Sea Angler’s two divisions, and the latest Clubman news.

Where To Fish
Your guide to the hot places to fish.

Sea Angler is the leading magazine for sea fishing news, tackle, tactics and marks to fish. If you’re a beach or boat angler thirsty for news, fishing stories, tackle tests, where to fish guides, and tips from the experts, then look no further! Sea Angler magazine gives you everything you need to catch fish!

Subscribe to Sea Angler magazine and benefit from the best discounts and free gifts available.

At the time of writing, Sea Angler were giving away a FREE Petzl Tikka Plus 2 Head Torch worth £37.50 to new subscribers!