It has been announced this week that £250,000 of new improvement work and a new fish pass at the Tyne Fishery in Hexham are to be funded thanks to the second Tyne Tunnel agreement.

The contract to construct the tunnel was signed just a few weeks ago and Tyne Rivers Trust has now received a cheque for quarter of a million pounds from the TWPTA for the works which will benefit the river, its inhabitants and local residents massively.

Tyne Rivers Trust Chairman, Andrew Davison, received the cheque on behalf of the Trust and said:

"Associated with the new tunnel were agreed safeguards that will minimise the impact on the quality of the water in the Tyne during the construction of the tunnel.  These include £250,000 towards the improvement of the river to benefit migratory fish and a new fish pass at Hexham.

“The Tyne Rivers Trust was set up to manage and improve the Tyne Catchment.  Now that we have received the funding from the mitigation agreement, we can get on with practical work to help to compensate in the unlikely instance that the new tunnel works causes harm as migratory fish pass through the estuary.  This work will have a lasting benefit for the river."

Tyne Rivers Trust aims to use the Tunnel money to draw in larger sums from elsewhere which will help them get a good start on tackling some of the biggest issues for the Catchment and for the fishery.

"The PTA contributed to the setting up of the Tyne Rivers Trust as part of the mitigation agreement and we are delighted to be able to invest in the future health of the river.

“We believe the safeguards in place for construction will minimise the risk, and can also see the immense value habitat works and a fish pass at Hexham will have in maintaining and improving the Tyne fishery.”

The construction of a new fish pass at Hexham will allow migratory fish, including salmon, sea trout and eels, better access to their spawning grounds on the upper reaches of the North and South Tyne. Habitat improvements in upper reaches of the river, starting with the removal of other smaller barriers to migration, will give the fish the best possible chance of spawning successfully, further protecting our valuable fish stocks.

The Tyne Rivers Trust is a registered charitable trust established in March 2005 which works impartially to safeguard the health of the River Tyne, its tributaries and the enjoyment of them for future generations.

In September 2006 the Trust launched its Strategic Action Plan for the Tyne Catchment and ambitious £2.6m fundraising campaign. The Trust aims to complement the work of statutory and other bodies and its aims parallel those of river trusts set up over the past decade to carry out similar projects on other major rivers around the UK. 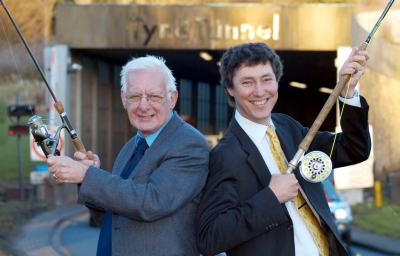