Sharkatag 2009 will run from the 12th to the 14th of June and builds on the successful spurdog ‘tagathon’ SSACN held around Loch Sunart only this time the destination will be the Solway with tope, smoothound and spurdog the targets.

SSACN hope to attract around 200 volunteer sea anglers fishing from the shore, kayaks and boats in an attempt to tag as many inshore sharks as possible in order to highlight the urgent need for shark, ray and skate conservation in Scottish waters as well as raising the public awareness of sea angling and its contribution to the economies of many coastal communities. 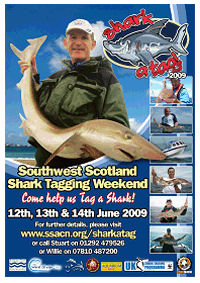 Joining in is easy, a simple form to fill in and only £10 per person to pay to help cover the costs of tags, tagging kits and suchlike – anglers can get more details and register via www.ssacn.org/sharkatag/

Each angler taking part will receive a Participants Pack with details about the weekend; SSACN tope and small shark handling best practice guides; a list of suggested launch sites and fishing spots; full tagging instructions, fish return forms and the first 100 to sign up will receive a Sharkatag tackle box sticker and also a pack of 6/0 tope/ray hooks each which have been kindly donated by Mustad.

Just recently Scottish Fisheries Minister Lochhead said “Our scientists tell us that some shark populations are critically endangered, and we need to respond to that advice.”  This is not news to Scottish sea anglers.

The severe decline in stocks has been apparent for the last two decades but the voices of anglers have been ignored by governments as being anecdotal evidence and that research based evidence is what is required – though they have never put programmes in place to gather it.

Over the long term, SSACN’s tagging programmes will help fill that gap by gathering valuable data regarding the growth rate, migration, non-natural predation, population and stock fluctuations of various species.

You can help us – Sign up for the event / donate space on your boat / help coordinate it / donate tackle – anything at all – we have already had tremendous interest from the media – TV, radio as well as the general and angling press – you can make Sharkatag a success.