Building on 30 year’s investigative experience in the Dorset Police, an ex-Detective Superintendent currently working for Cefas (the Centre for Environment, Fisheries & Aquaculture Science) didn’t know how much his experience in the CID would be appreciated in the world of international marine enquiries.

But the recent presentation of a plaque from the USA to Fish Health Inspector Steve Maidment shows just how valuable those skills have been for cross-government co-operation.

After retiring from the police Steve took up his post at Cefas in 1997, to provide a much-needed investigative role for the Fish Health Inspectorate (FHI) based at Weymouth, Dorset. His duties included under-cover operations to crack down on illegal importation and other transgressions related to fish health in England and Wales.

Steve and the FHI made inquiries in the UK on behalf of the National Oceanic & Atmospheric Administration (NOAA), based in California, USA.

The case, which lasted nearly two years, involved 200 California leopard sharks that were imported via Heathrow airport between 2000 and 2005. Once legally imported, the sharks were legitimately sold on to various aquaria around Great Britain.

Unfortunately, the sharks had been caught in San Francisco Bay and sold on while less than 36 inches long. Removing them from their natural habitat at that size is an offence under Californian State legislation.

Steve’s work on the operation helped to build a strong case against the criminal defendants. They were sentenced to imprisonment and given substantial financial restitution orders in California earlier this year.

Donald Masters, Special Agent in Charge of NOAA in California, commented: “Inspector Maidment distinguished himself as a very thorough and diligent investigator during his work on this case. He has been instrumental in overcoming this worldwide conspiracy. The tenacity and perseverance he demonstrated in conducting his investigation are hallmarks of his professionalism. His support and assistance in the protection of marine resources has enhanced the United States Federal Government’s efforts to manage our nation’s marine resources.”

US Attorney Kevin V. Ryan stated: “As a result of this local and international investigation, $1.5 million has been designated, by restitution and donation, to the restoration of wildlife habitat in the San Francisco Bay. The prosecution … has enabled federal and state authorities to devise means to further protect the California leopard shark.”

Steve said: “I’m particularly pleased that the money, $1 million from the offenders alone, will be used to such good effect. It’s gratifying to see that our work here in the UK can have such a wide impact. But I must say, I was stunned by all the fuss about my role in the operation. After all, it’s what we do here: it’s our job. But I am pleased and proud to receive the citation on behalf of my colleagues in the Inspectorate, who were also involved.”

Steve is due for retirement from Cefas in spring 2008, however the FHI will continue to ensure fish health regulations and legislation are properly enforced. Those interested in the work of the FHI should visit www.cefas.co.uk/fhi or contact Cefas directly. 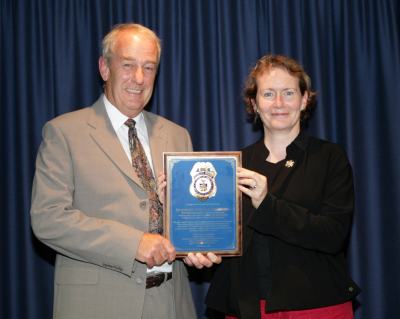