High Sea Kayaks was founded in 2009 by John Parry and Steinar Gustavsen and this collaboration draws together Steinar’s eleven years experience of constructing strip built kayaks and John’s illustrative and narrative expertise to create a series of guides and form templates.

Strip building has long been seen as something of a dark art, but now John and Steinar have set out to debunk that myth. Their book, “Strip Built Kayaks,” is a clear, concise volume that takes the reader through the entire process of building a strip kayak, from start to finish. This is not a coffee table book; rather it is designed to be used. It is spiral bound so that it can be laid open without being weighted down, the fonts and diagrams are clear and the margins can be annotated. 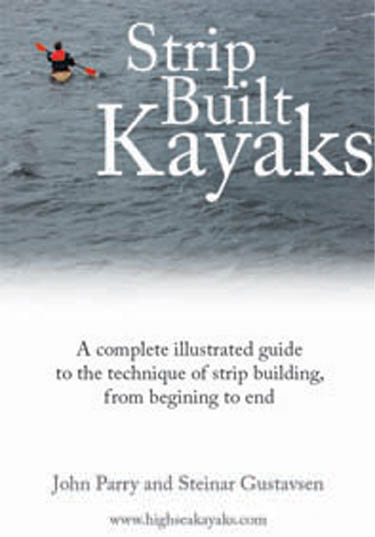 As a companion to the book, High Sea Kayaks have also developed form kits. A strip built kayak is constructed on a series of equally spaced forms – the size and shape of which are generally calculated from plans. However, High Sea Kayaks have dispensed with this tedious and time consuming method of building by developing form kits. An entire kit for each kayak consists of around 20 sheets of A3 paper printed with various templates, which can then be cut out and transferred onto pieces of chipboard to create the forms on which to build the kayak. Other templates include the cockpit, deck hatches, fin, stern and bow. Plans and instructions are included for reference.

Kayaking is an immensely enjoyable and remarkably cheap pastime. There is none of the cost associated with owning a traditional boat – no mooring fees, no need to hire a crane to get it into the water. You can store a kayak in your shed or garage, transport it on the roof of your car and there is no need to buy fuel for it or licence it either. Ongoing maintenance is practically non existent too.

It is also the best way to explore lakes, rivers and other inland waterways, or if you have a larger design of craft, it is also great to venture out onto the ocean. The specific geometry of a kayak means that you sit practically on the waterline, and can slip silently through the water, making it an excellent way of spotting elusive wildlife like deer and waterfowl, or in Scandinavian regions, moose, wolves and bears.

High Sea Kayaks currently produce form kits for two kayaks; the North Sea, which is a large, stable and exceptionally beautiful kayak, and the Harpoon, which is a fast, light kayak ideally suited to rivers and lakes, especially where portaging is necessary.