All three RIBs were powered by a single, 300hp Suzuki V6 4-stroke outboard all of which were totally standard, ‘off the shelf’ engines. Incredibly, they completed the gruelling course, which tested the endurance of both man and machine, with only routine engine maintenance.

Gordon Sutherland, from Aquatec Hi-Performance Marine, who lead the support crew said, "It was a pleasure to support the three crews and to work with these technically advanced, robust and durable engines. We had no major problems with the Suzuki outboards and they only had to come out of the water once in Inverness – and that was only for a routine oil and filter change!"

Two of the RIBs were part of Team Pulsar Racing and the third boat was a privateer entry by a team called Mud, Swell and Beers. 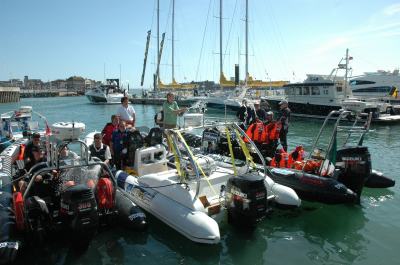 Team Mud, Swell & Beers entered an 8.6m Picton/Cobra RIB, which was a leisure RIB that had been modified for the race. It was crewed by Roger Summerton and driven by his son Tom and friend Joe Leckie, who at 19, who were the youngest qualified competitors in the race.

After the event Justin McInerney of Team Pulsar Racing sang the praises of the Suzuki outboards by saying, "The fact that the engines never gave us any trouble is a great testament to the Suzuki power units and their reliability. The support crew had very little to do but never the less were present all of the time, ready to help if required."

Roger Summerton echoed Justin’s comments and said, "Our Suzuki outboard was faultless, it didn’t even splutter. Having never done anything like this before, we really appreciated the presence of the support crew. It was a great reassurance to have them there. They were fantastic ambassadors for the Suzuki brand."

All three RIBs were competing in the same class and after a hotly contested race, it was Team Pulsar Racing’s ‘Vampire’ that emerged victorious, scooping the trophy for the ‘Best Position for the Lowest Powered Engine’ and a special award for ‘Bravery & Persistence in RB08’. This was in recognition of the crew’s achievement of taking the smallest boat in the competition around the entire course – including the second leg (Plymouth – Milford Haven), which was officially cancelled due to adverse weather conditions.

Skipper of Team Pulsar Racing’s ‘Vampire’, Greg Marsden said, "The Ribcraft handled the conditions without missing a beat and our standard Suzuki 300hp V6 4-stroke outboard sang. We successfully completed the full Round Britain course, including Lands End – a feat that I am extremely proud of. We improved our overall position on each and every leg of the race and only by surrounding myself with quality in terms of man and machine would this result have been possible."

Gareth Lumsdaine, Sales & Marketing Manager for Suzuki’s Marine Division said, "The stamina and seamanship of these crews was amazing. This was an endurance event that tested crews and equipment to the limit. The total time elapsed for all three engines was an incredible 105 hours 22 minutes and 13 seconds with most of that being at high speed. This really showcases the reliability of Suzuki’s 4-stroke outboards, and the excellent performance the standard engine delivers. To have powered these RIBs around Britain is something very special indeed."