Thayne said, “Andy Mill gave us this new tackle from Hardy to test. I have fished the Sintrix rods exclusively for three weeks and they are the finest rods I have ever fished. There is only one problem. Now I have to buy a new set of fly rods.” 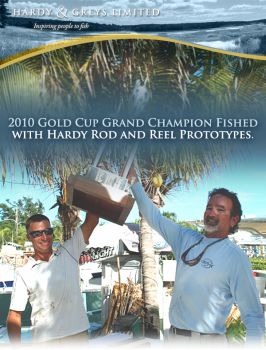 Captain Craig Brewer knew that Hardy was on to something when Andy Mill told him to “just fish them, you don’t have to worry. For six months I have been abusing monster fish with these rods. Trust me. Just fish them.”

Jim Murphy, President of Hardy North America said, “We knew that when we got our product development team at Hardy to work with Andy we would access the most challenging and thorough tackle testing process we could find. Andy has handed out dozens of prototypes to the most experienced and successful guides and anglers. The tackle has been deeply bent inside out well beyond normal use. They have been proven to destroy big fish in minutes. Now they have helped to win the most coveted fly fishing tournament in the world.

Andy Mill said when he heard the news, “Our new Fortuna reel is just as revolutionary as the rods and together we can say with complete conviction that The Game Has Changed.”