As part of a programme to protect a threatened species, recent Government legislation has put severe controls on the catching of Tope in England. Effective from 6 April 2008 anglers will only be able to catch Tope on a catch and release basis. Under no circumstances will Anglers be allowed to retain Tope, whether to eat or for specimen or record purposes. This code of conduct has been prepared to assist anglers fish for, catch and return Tope in a way that best ensures they survive the process.

Introduction
Whilst tope may look big and tough creatures they are actually quite delicate especially when out of the water. This code has been written so that you can enjoy tope angling but most importantly cause the minimum of damage to any tope you are lucky enough to encounter. Please remember a gut hooked fish is usually down to bad angling practice and should be avoided by striking early and releasing a tope at the side of the boat is the preferred method.

The majority of Tope angling is carried out from boats and this code of conduct is written taking this into account. Where Tope are targeted from the shore, the general comments on unhooking, fish handling and photography still apply.

Be Prepared
It is essential that you are prepared for any eventuality when bringing a tope to the boat. It sounds obvious, but the time taken to find buried tools in lockers or under a pile of clothing means the tope is under stress for longer than necessary. This means having T bars, pliers, wire cutters, tagging kits, weighing slings (if applicable), cameras etc. at hand and each person on board knowing what is expected of him.  Time is the vital factor that may dictate whether the fish will survive the capture and subsequent release

Hook sizes
The use of bronze finished hooks is the singularly most important factor in the release of hooked sharks, as any hook that has to be left in a fish will dissolve rapidly. A large hook, size 6/0 or above, is recommended, either barb-less or with the barb crushed to facilitate the unhooking process. As lip hooking significantly reduces the likelihood of a hook being left in the fish the use of circle hooks should also be considered.

Traces
Tope are a large, strong fish with sharp teeth and rough skin. Losing a fish because of an inappropriate trace increases the likelihood of fish mortality due to trailing line. The trace should be at least 2 metres in length so the tope’s tail can’t hit your main line. The preferred traces are either 2 metres of 250lb mono straight through or 25cm. of 150lb wire to a swivel attached to 175cm. of 100-150lb. mono/braid.
Long, wire only, traces are dangerous as they can cut the hands of the lead man when holding the trace with a thrashing tope on it.

When to strike
The old books used to say, “Strike at the start of the second run”, but this will usually lead to a deep hooked fish. Once the tope has started the familiar screaming run, count to six on a big bait (full mackerel or flapper) or three on a small bait (fillet size) and wind down firmly into fish. It is imperative you wind quickly at first to get rid of the bow before lifting the rod to set the hook.
A gut hooked fish is usually down to bad angling practice, it is better to miss the bite than gut hook the fish.

Releasing at the side off the boat – This is the preferred method.
Although tope cannot be deemed as man eaters, they can inflict serious injury if not handled correctly. The recommended option is to release the fish at the side of the boat with a long handled “T” bar. This is far better for the fish and easiest option for the angler. Insert the slit on the bar round the bend of the hook with one hand and pull the line down with the other. Use the weight of the fish to pull out the hook. A barb-less hook or crushed barb makes this a simple task. 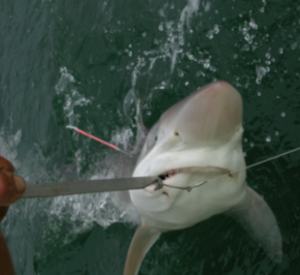 To leave the hook in or not?
There are occasions, all though this is often down to inexperience or bad angling practice when, the tope swallows everything and the hook is out of sight or in the protruding stomach.  The best option for the welfare of the fish is to cut the line as close to the hook as possible. The tope will lose the hook eventually (providing it is not stainless steel) and will swallow the stomach as this method is used by sharks, as a defence mechanism to get rid of unwanted stomach contents. If you can see the hook in the wall of the mouth then it may be preferable to bring the fish into the boat to safely remove the hook.

Bringing the fish on board
If you need to bring a fish on board then the safety of both the fish and the angler is paramount. Remember sharks have no ribcage and the water pressure keeps all the vital organs in place. Dragging a fish backwards over the gunnels can easily rupture the internal organs.  It may swim off fine but die a few days later. It is essential you try and bring the fish in horizontally, with arms supporting the abdomen if possible.

For vessels with gunnels that allow you to reach the fish by hand, firmly hold the dorsal fin and tail and lift the fish horizontally, alternatively a pectoral fin may be used, however, where possible, the abdomen should be supported to the highest degree possible. For vessels where you cannot reach the fish, a large, landing net should  be used, taking care to lower the fish gently to the deck once aboard
After bringing the fish on board, it is important that everyone knows their job. If you have spare men on board then ask them to stand clear. Once the lead man has firmly grasped the trace, the drag on the reel should be reduced to allow the lead man to gain line if he requires it, or allow the fish to move if the lead man releases/fails to grasp the leader and the fish still has a head of steam.  When the tope is brought aboard and placed on the deck, the lead man should then squat around the fish applying enough pressure to restrain it. A wet cloth or towel soaked in sea water should be placed over the head ensuring the eyes are fully covered; this usually pacifies the tope and makes the removal of the hook with a disgorger or long nosed pliers an easier and safer procedure. Remember, a loose tope on the deck can cause much damage to itself and to persons on board.

Where an angler is fishing alone it is recommended that all fish are released at the side of the boat, either by using a T bar or cutting the line close to the fish.

In no circumstances is the use of a gaff recommended.  It is not necessary and seriously damages fish.

Weighing a fish.
If the tope is to be weighed, the preferred method is by the use of a suitably sized weighing sling laid out on deck beforehand.  The fish should be placed in this sling immediately it is unhooked, ensuring that unsupported movement within the boat is restricted.  Ensure that the fish is placed evenly within the sling before lifting.

Photographing the fish.
For photographing and returning the fish remember to keep the fish horizontal, with the abdomen supported by the arms and the tail grasped firmly to prevent the fish slipping onto the deck.

Releasing the fish.
When releasing the tope, hold the head of the fish into the tide for a short period to get oxygen back into its gills, once the fish kicks that is a good indication that it has recovered enough to be released.

Conclusion
The best practise for angler and fish is to remove the hook at the side of the boat, but if you have to land the fish then the safety of the angler and fish is paramount and care must be taken at all times. Tope are a large, powerful, active fish and their teeth are as sharp as razor blades and will instantly bite a finger to the bone. Enjoy the fishing but please remember respect must be given to these magnificent sharks at all times.

By following this code, you will help preserve the stocks of this magnificent fighting fish for generations to come.

This code of conduct was produced by Save-our-Sharks, an angling organisation dedicated to restoring and conserving shark, skate and ray populations in the UK. For more information log on at   WWW.Save-our-Sharks.org