Leading boat insurance experts Haven Knox-Johnston provide a timely reminder of last year’s winter which caught out many boat owners leaving them with an average repair cost for a frost damaged engine of £7,000!

An insurance policy provides cover for damage caused to your boat by frost only if you have taken reasonable precautions to protect it. 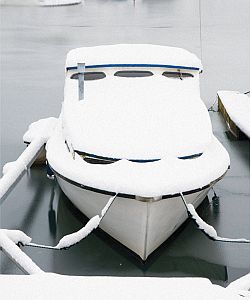 Imagine the scene, it’s a crisp late autumn morning, you look from the window to see your garden covered in a carpet of white. You think perhaps another log on the fire or nudge the thermostat up to set a cosy temperature? Did you think about the boat? It’s December; shouldn’t you have done something by now to make sure it’s not damaged by freezing temperatures? The answer is of course is yes, but it could be too late.

For a moment cast your mind back to last November. Temperatures fell to a freezing -10°C in some parts of the country. Trapped freshwater in cooling systems or holding tanks will freeze at 0°C, seawater at -4°C. Catastrophic damage can be caused to any part of the boat which contains water; engines are particularly susceptible. When water freezes it will expand by 9%. This causes fractures in the engine block or manifolds and risers. A common misconception is that a frost plug, or core plug, is designed to prevent damage from freezing. It rarely does.

Taking no action or insufficient action is simply a costly mistake that will ruin your enjoyment of your boat. An “it’ll be fine” attitude will leave you out in the cold! Ask yourself some simple questions. Would I go on holiday in the winter and leave my heating turned off? Or leave my car without antifreeze in the engine’s cooling system? The answer is, of course not!

With ever increasing media coverage it shouldn’t be a surprise how cold it can be, statistically it’s getting colder.

An astonishing 10% of claims by value reported to us in the last twelve months have been as a direct result of boat owners taking insufficient or no action to protect their property against damage by frost and freezing temperatures. Your insurance policy provides cover for damage to your boats machinery caused by frost, provided that you have taken reasonable precautions to protect it against damage caused by freezing temperatures. That isn’t “insurance speak” for it’s not covered, far from it. Each and every claim is considered carefully by our claims team. We’ll look at what you’ve done and apply a number of simple tests to our enquiries to see what you have done and what you could or should have done. Naturally if you’ve done nothing it should be obvious to you that you have not been reasonable in your actions, it should not then be a surprise when we have to tell you we can’t help you.

You might be thinking well that’s all well and good but what are you doing to help me, after all you have the experience and resources, I don’t. The simple answer is each boat and especially their engine configurations are different; guidance we can offer can only be general in nature. If you are in any doubt you should seek guidance from a professional engineer. A warning however, think carefully about the advice you receive. If it looks too simple it probably is. A number of our clients fell foul of freezing temperatures by simply fitting, on professional advice, tubular heaters in the engine room and nothing else. Unfortunately they were not told where and how to fit them or that the marina’s power supply might be unreliable. The result, a frozen engine of course and a repair bill on average of about £7,000.

We have tried to be pro-active in our research to help you to help us. We have spoken to qualified persons in the United Kingdom and also traditionally cold countries Norway, Sweden and Canada. What follows is what we think a reasonable boat owner should do to protect their investment from frost and freezing temperatures:

Some manufacturers recommendations deal with winterising only when the boat is ashore. If you plan to use your boat during the winter the process can normally be repeated afloat but be careful to capture the antifreeze solution in a large bucket or barrel and don’t allow it to be expelled by the bilge pump as it can be harmful to the environment. One engineer we spoke to said that he frequently fits extensions to drains to make the task easier. Professional winterising should cost you no more than £150.

Repeat the process every time you use the boat in the winter unless of course the forecast is for temperatures well above freezing. One engineer told us “…all the time the water jacket has raw water in, it is at risk, it matters not if the water has been there for one night, or one month the risk is always there”. Another said “Depending on temperature damage can occur in short order or a few days”. We say don’t gamble, if there’s a risk take positive action.

We think applying a common sense test of reasonableness is the correct approach. Other Insurers have different approaches which generally impose a positive duty on you following manufacturer’s recommendations exactly. Read your manual, some are very vague.

One long term forecaster has predicted that the 2011-2012 winter “…will be exceptionally cold and snowy with well below average temperatures…it is therefore vital to start preparing now [by] raising awareness”.