LONDON (April 21, 2007) – Aquapac International Limited, from
Lambeth in South-East London, has been recognized for its achievement
in continuous innovation and development by being awarded the Queenâ€™s
Award for Enterprise: Innovation 2007.


The
brainchild of three young windsurfers in a London pub back in 1983,
AQUAPACÂ® has grown into one of the best-known names in the Outdoor
market: a global brand, selling in 55 countries from Hong Kong to
Hawaii. Aquapac has an extremely loyal customer following, including
military and emergency services as well as outdoor active
consumers.

The Queenâ€™s Award is the most
prestigious award that can be bestowed on a British company and has
been described as a Corporate Knighthood.
â€œWe couldnâ€™t
aspire to a more authoritative recognition of Aquapac as the leading
brand in its market. This is a much-deserved acknowledgment of the
excellence of our employeesâ€™ dedication and achievement in more than 20
years of continuous innovation. We are both thrilled and
honoured.â€
Tim
Turnbull, Chief Executive

Recipients of the Queen’s Award are selected by an independent
panel of judges who send a shortlist of companies to Prime Minister
Tony Blair, and he recommends a selection to Her Majesty The
Queen. 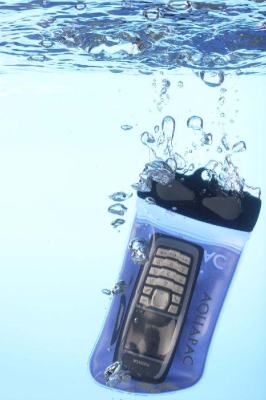 Aquapac has been driven by
innovation since its incorporation in 1983. Its first product – a
waterproof case for the Sony WalkmanÂ® – has been developed to form
today a truly comprehensive range of 100% waterproof cases. Protecting
everything from your mobile phone and your camera to your PDA or your
iPodÂ®. The malleable material allows users to use their electronics
entirely as normal while theyâ€™re sealed safely inside.

The key is the distinctive, patented AQUACLIPÂ® sealing
system. Tested by BSi (the British Standards Institution) to the
highest waterproofing standards available. Cases sealed by the Aquaclip
are guaranteed submersible to at least 5m/15ft and that is backed by a
3-year global warranty (the Warranty Returns Rate is a remarkably low
0.01%).

With fewer than 30 employees and still
manufacturing in South-East London, Aquapac has achieved remarkable
success as the innovator in its industry. The AQUAPAC brand is relied
upon by knowledgeable watersports enthusiasts and professional users
worldwide.

â€œYou could say this was the
culmination of 20 years of innovation. But we see it rather as a
launchpad for the next 20 years – pioneering design and development of
products for the outdoor active.â€
Andrew MacAuley, Product Development
Director

For more information on the Queen’s Award
visit: www.queensaward.org.uk
The full range of Aquapac cases can be viewed at: www.aquapac.net

1983 â€“ 1984
Three young bucks in a London pub dream up the idea of a
waterproof case for a Sony WalkmanÂ® that would allow them to listen to
tunes while windsurfing. They incorporate a company, and set about
devising their first case.

The AQUAMAN personal
stereo case is launched at the London Boat Show, followed shortly by
the AQ2 case for hand-held VHF radios.

1984 â€“
1993
The AQ2 series carves a solid niche for itself as the
professionalâ€™s choice for VHF radio protection, and they start to be
ordered by oil companies in the North Sea, by the Royal Navy, by HM
Coastguard, by the RNLI, and by emergency rescue teams all over the
world.

1996 â€“ 1997
A new
waterproof clamp is launched, and patented worldwide â€“ the AQUACLIP is
born, and a revamped range of products, sealed by the Aquaclip, is
launched under the brand name AQUAPAC.

1998
The company is honoured with the Queenâ€™s Award for
Exports.

1999
The Design Council
selects the Aquaclip sealing system as a â€˜Millennium Productâ€™.

The in-house design team files a patent application on
its first â€˜wire-throughâ€™ Aquaclip. The â€˜TCâ€™ Aquaclipâ€™ is born. This
invention creates a watertight seal around a thin wire or tube.
Originally designed for portable CD players â€“ sealing around the userâ€™s
headphone wire. But seven years on its major use is for insulin pumps
and cochlear implant processors. Allowing deaf children and children
with diabetes to bathe and swim like other children.

2000 â€“ 2001
Aquapac launches the â€˜Aquapac Outdoor
Championsâ€™ programme, with explorer Sir Ranulph Fiennes and mountaineer
Alan Hinkes agreeing to be Patrons. The programme is a joint initiative
with the Association for Outdoor Learning. The aim of the programme is
to raise awareness of the benefits of outdoor education and learning
for personal development and achievement.

The FLASHPAC, an inflatable hand
beacon, is developed in collaboration with a US flashlight
manufacturer. It is launched at the Marine Aftermarket Accessories
Trade Show in Las Vegas where it wins the only Honourable Mention in
the National Marine Manufacturers Associationâ€™s Innovation
Awards.

2004 â€“ 2005
The International
Sustainable Development Studies Institute uses Aquapacs during their
survey of the impact of the Tsunami in South East Asia.

Work starts on the development of a second- generation
wire-through Aquaclip. A US patent application is filed. The â€˜MkIIIâ€™
Aquaclip is an invention which seals around much thicker wires and
tubes. All sorts of applications are foreseen for this novel
technology, particularly in the medical and military markets.