â€œThe Lost World of Mr. Hardyâ€ is the new DVD documentary based on the life of Jim Hardy, the last remaining member of the Hardy family to work for the world renowned firm, and now retired.

The documentary DVD, produced by Trufflepig Films focuses on the 135 year journey of the Hardy brand and the story of a much loved family business.

â€œMister Jimâ€ was how the employees respectfully addressed their boss, Jim Hardy. It was Jimâ€™s Grandfather and Great Uncle who in 1873 opened a small shop selling fishing tackle in Alnwick in the far North of England. The DVD documents how their skill, devotion and innovative marketing strategies allowed them to conquer the world.

Finally, after two years in the making â€œThe Lost World of Mr. Hardyâ€ is complete. Featuring exclusive footage of Jim Hardy being interviewed, original photographs taken at the Hardy factory and of the Hardy family, take a look at the Hardy, Alnwick factory as it once was and how it is today. Hardy, the Rolls Royce of fishing tackle.

Producer and Director, Andy Heathcote said;
â€œI think the film suggests that there are aspects of our life that we have always taken for granted but wonâ€™t realise their value until they disappear. Once they have gone we will realise, but by then itâ€™s too late.â€

Priced
at Â£25, “The Lost World of Mr. Hardy” DVD will be available to buy from
The Complete Angler Store and the filmmakers website at www.thelostworldofmrhardy.com. 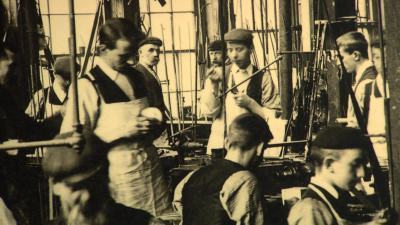 Workers In Bondgate Factory Circa 1910