Jonathan Eyers has been fascinated by sea life since he saw Jaws at far too young an age. Unfortunately, whilst writing this book he discovered his tolerance for disgusting things is probably higher than most people’s. He is the author of Don’t Shoot the Albatross!: Nautical Myths and Superstitions, also published by Adlard Coles Nautical.

How to Snog a Hagfish! explores the most bizarre, the most disgusting and the most fascinating creatures that inhabit the oceans. 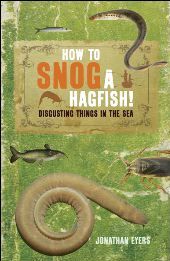 When attacked, the hagfish also known as the slime eel, ties itself in a knot that travels the length of its body, squeezing out mucus by the bucketful and making it impossible for a predator to keep hold. To eat, a starfish regurgitates its stomach, digests its food then swallows its stomach back down again. Pearlfish stick close to sea cucumbers, whose bowels they swim into when danger’s near. And with shark attacks and jellyfish encounters, the oceans take on another level of repulsiveness when man dips his toes in the water.

We know more about the surface of the moon than we know about the underwater world, but some of the species covered in this book are beyond even the imagination of science fiction writers. Entertaining yet informative, the idea of this book is not to wallow in grossness with the intention of putting people off their dinner, but to explore just how fascinating and ‘alien’ our own planet can be.

Highly illustrated, and with stories and anecdotes that help bring a human perspective, this book demystifies the natural world beneath the waves, and shows how it’s not quite so shocking when you understand why these creatures have developed the way they have.

to view this book on Amazon UK.