When angling legend John Wilson, took his daughter Lisa fishing in Scotland for common skate, she managed to reel in a 190lb winner – heavier than herself!   Lisa and John were fishing the saltwater lochs of the Scottish highlands when the impressive catch was captured on camera for Discovery Real Timeâ€™s stunning new series, John Wilsonâ€™s Dream Fishing.

Lisa, 34 is not a regular angler and admits she has very little experience with a rod, apart from the odd fishing trip with her Dad as a child.  The back breaking event took Lisa over an hour and a quarter to reel in the giant skate, who was sitting on the bottom of the lake 500 feet below.  Not having the same strength as her Father, she had to take frequent breaks in between reeling the fish in.  Once the catch was measured and weighed, it was put straight back into the water.

John Wilsonâ€™s Dream Fishing tackles some of the most demanding fish species, ranging from giant common skate and powerful conger eels, to blue sharks and even the legendary Mekong catfish. The series also features a variety of beautiful and wild fishing locations across the British Isles and abroad.

John Wilsonâ€™s Dream Fishing premiering on Discovery Real Time, October 27th at 9pm, combines an impressive variety of fish species, with a diverse range of unique angling locations around the world and top tips and techniques from the UKâ€™s favourite angler.  This brand new programme is a must see for anyone who likes fishing, from amateurs to professionals alike – not to be missed! 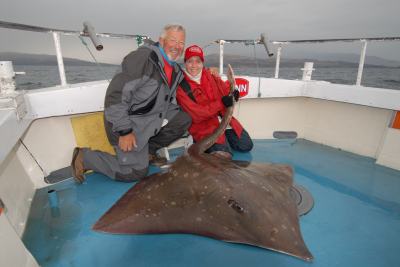