Microsoft is donating software, with a market value of £5M, to the RNLI over the next three years. The donation will allow the charity to focus its expenditure in other areas to support key life saving initiatives, such as RNLI MOB Guardian, which involves a large annual financial commitment.

MOB Guardian, whose infrastructure runs on Microsoft applications, is a man overboard and vessel locator system, developed by the RNLI to help reduce deaths in the fishing industry. In less than a year of being introduced, the system has already helped save 5 lives. The Microsoft donation will allow the charity to free up its funds, helping it to plan more effectively to meet its objective of making MOB Guardian more affordable to fishermen in the UK and Ireland. The donation also allows the RNLI to continue investing in innovation, particularly the Systems and Information Management System, which is also based on Microsoft technology and provides essential operator information to lifeboat crews and is in operation on the Tamar class lifeboat, the RNLI’s latest all weather lifeboat.

To thank Microsoft for its generous donation, the RNLI Chief Executive, Andrew Freemantle winched down to thank Microsoft Marketing Business Officer, Matthew Bishop, as he and his team participated in a sea survival training experience at the RNLI lifeboat college, Poole (Dorset). 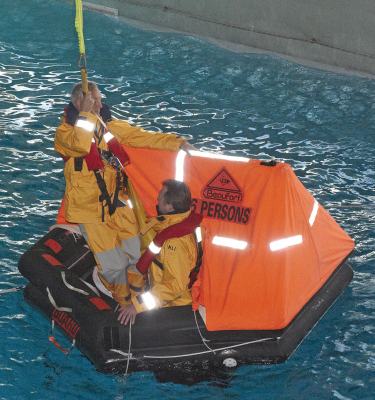 ‘This generous donation from Microsoft will greatly assist the RNLI in maintaining its lifesaving services in the current difficult economic climate. It will help us to ‘weather the storm’, that we, along with many other charities, are facing. Indeed we are bracing ourselves to be fully hit by the storm next year, when the impact of reduced share and house prices on the value of legacy gifts – upon which we are so dependent – is expected to become apparent.

‘This exceptional donation from Microsoft gives us greater financial flexibility to continue supporting lifesaving initiatives such as the roll-out of MOB Guardian, which could help provide 1,500 fishing boats with a safety system over the next three years.

‘It gives me great pleasure to personally extend the thanks of the RNLI to Microsoft, which is not only giving a donation, but is more fully immersing itself in the work of our volunteers by putting its staff through crew training techniques; it is these techniques that help keep our crew safe, should the worst happen at sea – it must be remembered that our crews frequently go and brave the eye of the storm to help save others.’

Additionally Matthew was introduced to Dorset fisherman, Tom Russell who uses the RNLI MOB Guardian safety system. Tom, who often fishes alone up to 15 miles off the Dorset coast, explains how the unit is like having someone watching over him:

‘The way in which the RNLI is using the latest technology to save lives is inspirational. It’s not so long ago that volunteers were rowing out through the surf to try and locate those in danger by sight and good fortune.  The more fishing boats and sailors are covered by MOB Guardian and technologies like it, the safer those who work and play on the water will be. We’re delighted to support the vital work of the RNLI as part of our software grant programme, and look forward to developing many new initiatives in the coming years.’