CABO SAN LUCAS, Mexico — They held the same position — fourth place — the previous three days but the steady paced fishing of team members from Islamorada, Fla. USA, paid off in the end as they captured the title in the IGFA Offshore World Championship.

Despite a “slow bite” for most of the 63 teams of anglers in the fourth and final day, the five men representing their win in the Outdoor Channel Offshore Classic in the Florida Keys released two marlin and a dorado as a weight fish totaling enough points to win. The ninth annual event sponsored in part by the Secretaria de Turismo de Baja California Sur, hosts competitors from 27 nations on six continents, the single largest contingent of international teams to compete in a fishing competition

Four teams that had been in close contention atop the leader board the previous three days – from Italy, Australia, Croatia and the Sultanate of Oman — found the final day less forgiving as each went scoreless.

The Florida Keys’ team was made up of John Timura, Robert Collins and Taylor Walsh, all of Islamorada, along with Scott Salley, Naples, Fla., and Ken Longaker of Seattle, Wash.

Collins said the group which has fished numerous occasions together, had two practice days in Cabo, enough time to put the mistakes behind them.

“We fished near perfect for the conditions presented to us,” said Collins. “On day two the boat had engine troubles and we weren’t able to back down on the fish or maneuver properly, but we still overcame those problems and did well.

“We just fished steady,” said Collins. “Every one of the team members gets along great and that’s part of the success; our personalities are pretty much easy going. In general we all have great karma,” he laughed.

Collins, who has Florida homes in both Islamorada and Naples, is also a two time winner of the IGFA Inshore World Championship, an annual event held over three days in July to test the best in fly and light tackle fishing for five species in the Florida Keys.

Previous leaders Croatia, Italy and Australia in the top four

Coming in second with 3900 points were Day 3 leaders the 9th Int’l Big-Game Sportfishing Tournament team from Jezera, Croatia. Members included Dario Marijan, Davor Pliso, Jakov Begovic, and Vinko Radetic who the previous day had 10 marlin releases, but went zero in the final round.

The fourth and fifth place finishers who had been among the top teams on the leader board also blanked on the final day. Both the team from Mooloolaba, Australia representing the Springwood Marine Sailfish Shootout, and Italy’s San Benedetto del Tronto representing their win in the La Sfida TroFeo M. De Nardis scored 3700 points, with the Australian’s winning on time.

Finishing the rest of the Top 15 places among the 63 teams were:

(Complete scores are posted on the IGFA.org web site).

IGFA OWC tournament director Mike Myatt said, “Cabo san Lucas has the greatest striped marlin fishery in the world. We’re thrilled with the numbers and we had a great dorado bite. These fish put our champion anglers to the test and the winners are truly world champions.”

IGFA President Rob Kramer, added “Day four was an exciting day with several teams in the hunt for the top spot. Once again we had a spectacular year here in Cabo San Lucas.”.

Each catch-and-release of a marlin (blue, black and striped) or a swordfish equals 300 points. Sailfish count for 100 points. The billfish, all caught on circle hooks, are scored and released alive at the boat in accordance with IGFA tournament rules.

On Thursday 69 marlin and one sailfish were released, with one tuna and six dorado brought to the weight scale. Seas were calm with mild temps of 90 degrees and light winds.

Wednesday was the biggest day for most of the teams with118 striped marlin and two sailfish released in the only day of rough seas.

The top male angler of the tournament with 3000 points was Dario Marijan on the Croatia team based on time of his last catch caught first.  Also with 3000 points was Italy’s Paulo Viscogliosi on the YCSS-IMD Fishing Tournament. He added 900 points to his total in the final round.  Randy Towe of the Miami Swordfish team finished third with 2700 points.

Day 3 leading boat captain Julio Gonzales on the Bill Collector of the Pisces Fleet held onto win with a total of 4900 combined points of the four teams he guided. He had skippered the Mooloolaba, Australia team to 3400 points in Day 3 and added another 600 points on Thursday to his tally.  Victor Sandes on the Dream finished second with 4500 points catching his last fish first by just three minutes over fellow Picante fleet captain David Lieras who ended in third place.

The final results of the four-days were announced on Friday at noon PDT.

The teams previously qualified by winning one of 130 IGFA sanctioned tournaments held in 38 countries worldwide during 2007. Each team fishes from four different boats captained by local Cabo guides. The teams also receive “weight” points (per pound) over 25 lbs. for tuna, wahoo and dorado.  Local charities receive the donations of all fish weighed at the Cabo docks.

The top team won engraved watches along with trophies and merchandise.  Awards are presented through to the third place finishing team. 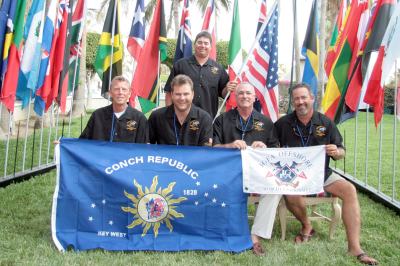 The daily results and complete scoring are posted on the IGFA’s home page at www.igfa.org . A list of the 2008 teams can also be found there as well.

Next year, to begin the event’s 10th anniversary, the tournament welcomes the Bonnier Marine Group which will join the IGFA to manage the world championship which began in 2000.

Founded in 1939 the International Game Fish Association is a not-for-profit organization committed to the conservation of game fish and promotion of responsible, ethical angling practices through science, education, rule making and record keeping.  IGFA members are located in over 125 countries and territories. The IGFA welcomes visitors to its 60,000-square-foot interactive International Fishing Hall of Fame in Dania Beach, Florida.